In the next few blog posts, I will be doing something a bit different than I have in the past. Rather than addressing a Scriptural question about geography as I typically have, my aim will be to introduce you to a series of five sites that are interconnected thematically. I call this series Let’s Take Five. The themes linking each series of five sites will be varied. For example, I will chose sites that have some central element – be it chronological, regional, functional or visual – in common. This week, I would like to show you five sites that are connected chronologically. Namely, they all were built in the final decades of the first century BCE, just a few years before the birth of Jesus. Even more specifically, they are all connected to a single individual: the infamous Roman appointed king of Judea, Herod the Great. This list will be familiar to many of you, as Herod was responsible for building some of the most famous sites in Israel. Let’s go!

The third terrace of Herod’s northern palace at Masada, used as a dining room. The frescoes have been restored.

First a bit of background about the life of Herod the Great. The Land of Israel was conquered by the Roman general Pompey in 63 BCE and would effectively remain under the imperial control of the Romans for the next six centuries. At first, things went quite smoothly. For the first few decades of their rule, the Romans did not have any pressing interest in governing Judaea directly. Unlike the province of Syria to its north, Judaea was not highly valued. It was a remote province on the eastern frontier of the empire whose main function was to remain a solid barrier between the territory of Rome and its mighty neighbor to the east: the Parthians. 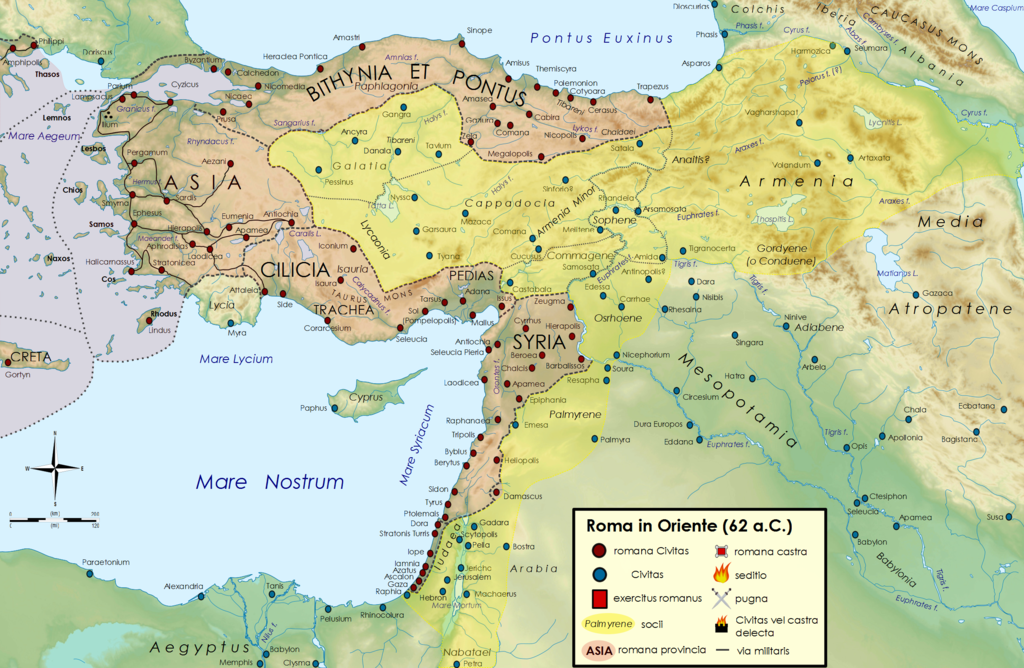 Moreover, the Romans did not want to become mired in the complicated religious disputes among the Jews. So instead of sending their own governor to rule, they appointed a series of local client kings to keep the peace and collect taxes. Antipater, a prominent chieftain from the region of Idumaea (the biblical region of Edom, that is, the northern Negev region), became one of these kings in 47 BCE. He was assassinated in 43 BCE and six years later, after a civil war, his son Herod became his successor. Like his father, Herod was extremely loyal to the Romans; he had gone as far as traveling to Rome in 40 BCE to curry favor with Augustus and Mark Antony and was crowned “King of the Jews” by the Senate. 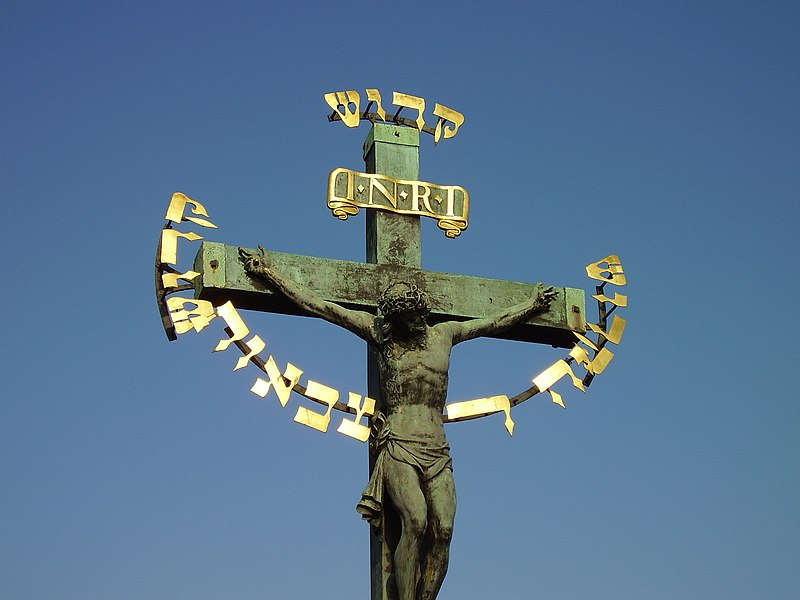 A crucifix on the Charles Bridge in Prague bearing the Latin INRI as well as the Hebrew words “Holy, Holy, Holy, the Lord of Hosts”

Interesting aside: It is quite probable that the famous INRI (Latin: “Jesus of Nazareth King of the Jews”) placard placed above Jesus’ cross is derived from the well-known royal title that was attached to Herod. Because this Herodian title was so famous, the Roman soldiers could easily use it to mock Jesus. What could be more ludicrous than depicting an inert Jesus as the ruthless Herod? This would mean that both at the hour of Jesus’ birth (Matthew 2:1-23) and his death (John 19:19), the influence of Herod the Great was inescapably present. This is hardly surprising given the indelible mark Herod left on the Land. 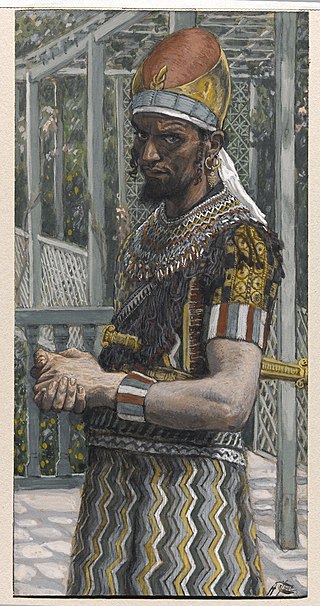 James Tissot’s 19th century depiction of Herod the Great is based on the artist’s imagination more than historical evidence.

During the three decades of his tyrannical rule (37-4 BCE), Herod accomplished a great deal, but he is best known today for his magnificent building projects. Herod oversaw dozens of large-scale architectural projects, many of which were designed to curry favor with his Roman patron, the Emperor Augustus. In doing so, Herod revolutionized the facade of many Judean cities, in effect setting the foundations of numerous sites in the Holy Land for the next two millennia. Let’s have a look at some of these:

Masada is one of the most visited tourist sites in Israel, attracting over 700,000 visitors annually. Today it is fairly easy to reach this desert fortress, taking only about an hour by car from Jerusalem. But in antiquity, this site was very isolated. It is located on the summit of a steep tabletop mountain, on the shores of the forbidding Dead Sea, far from any sources of drinking water, about three days by foot from Jerusalem. To reach it, one had to hike through the dangerous Judean Desert which was rife with brigands and wild animals. Herod went to great lengths to build a lavish palace in this remote location and likely only visited it a handful of times. He kept it in case of danger. During his lifetime it was used as a resort for high-profile guests of the king, who would spend long hours in the swimming pool and bathhouse in this most unlikely location.

2. The Cave of the Patriarchs, Hebron 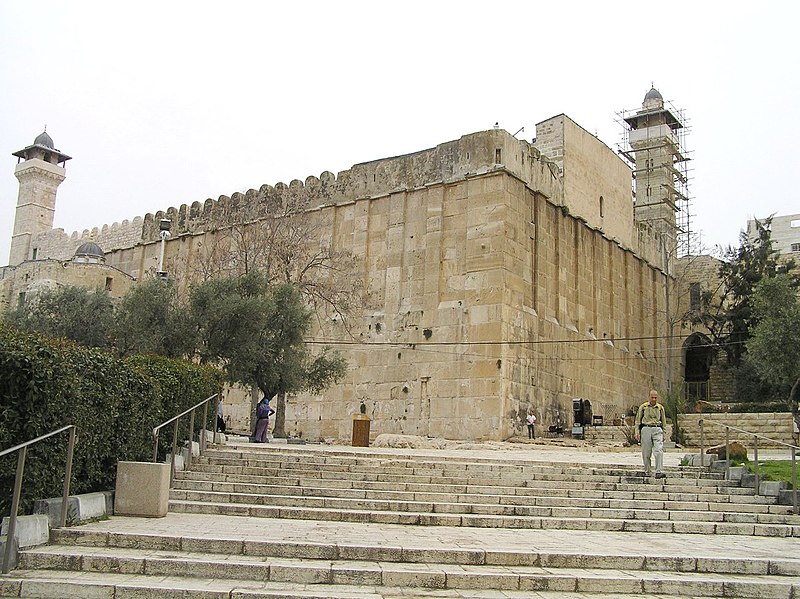 Contrary to his mountain-top refuge at Masada, Herod did not create the Cave of the Patriarchs in Hebron “from scratch”. This underground chamber in the center of Hebron is the burial cave of the three biblical patriarchs (Abraham, Isaac, Jacob) and three of the four matriarchs (Sarah, Rebecca, Leah; Rachel is buried near Bethlehem) according to the Book of Genesis. It had been a venerated site for hundreds of years prior to Herod. But its current form – the massive stone structure seen above – was designed and executed under Herod. Although the site has changed hands many times over the last 2000 years (church, mosque, church, mosque, synagogue) it is still fundamentally Herodian. Importantly, we see a Herodian precedent here. Herod devised the ingenious concept of covering an uneven hill with a large stone platform upon which monumental Roman architecture could be erected. Here in Hebron he did so on a relatively small scale. In Jerusalem (see #5 below), he used the same technique on a much grander scale. The minarets in the photo above are of course later additions. 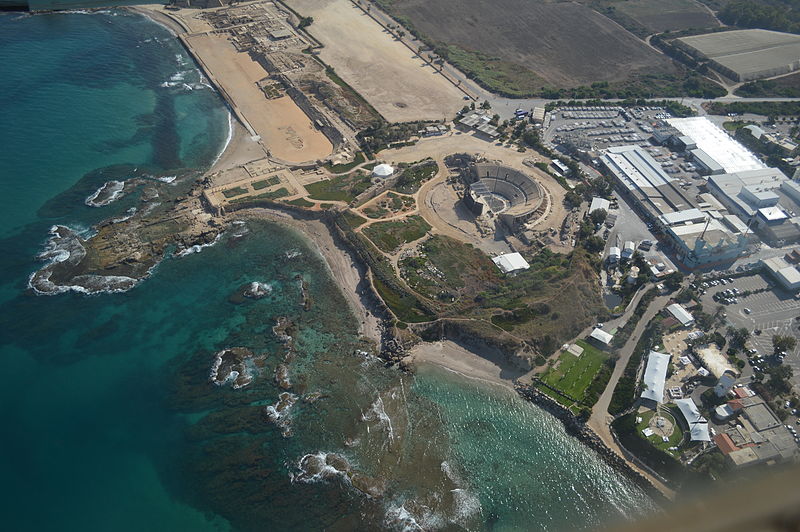 Herod was quick to recognize that one of the major flaws of the Land of Israel is a lack of quality deep ports along its long coast. This made it difficult to attract the large Roman shipping boats that crisscrossed the Mediterranean Sea. Herod understood that in order for Judea to be truly linked to Rome, it would need an impressive modern port. Only then could Herod truly refer to the sea using the same Latin term that the Romans used: Mare Nostrum (“our sea”). The result was the massive harbor city of Caesarea-Maritima. It took him twelve years (22-10 BCE) to built it, and he named it after Caesar Augustus. In order to overcome the shallow sand-filled coastline, Herod build an artificial harbor in the deeper water offshore using hydraulic cement. This was cutting edge technology in the first century. Unfortunately, little of the harbor has survived due to the destructive power of the waves and looters. 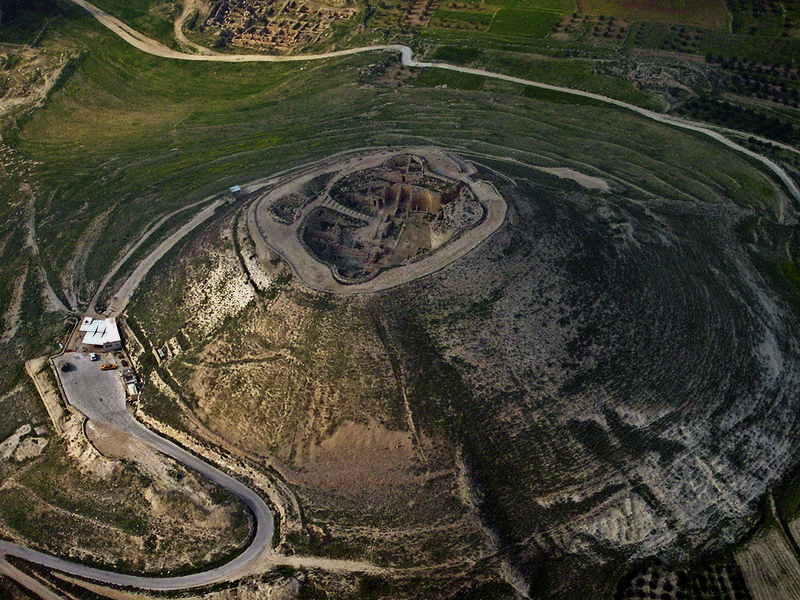 According to the first century historian Josephus, Herod was a tyrant and a megalomaniac. He was also a control freak and left nothing to chance. He was therefore sure to make plans for a lasting eternal memorial to himself long before he actually died. His burial site is known as Herodium and and is the only site he named after himself. It is located about 7 miles south of Jerusalem and was used as a fortress and pleasure palace during his lifetime (like Masada). He built it by covering a prominent hill with huge quantities of soil, thereby creating a perfect half-dome which could be viewed by the residents of Jerusalem. The actual tomb of Herod was a large mausoleum placed on the side of this artificial hill. The tomb was mostly destroyed by anti-Roman rebels in the year 70 CE, but remains were discovered by archaeologists in 2007. 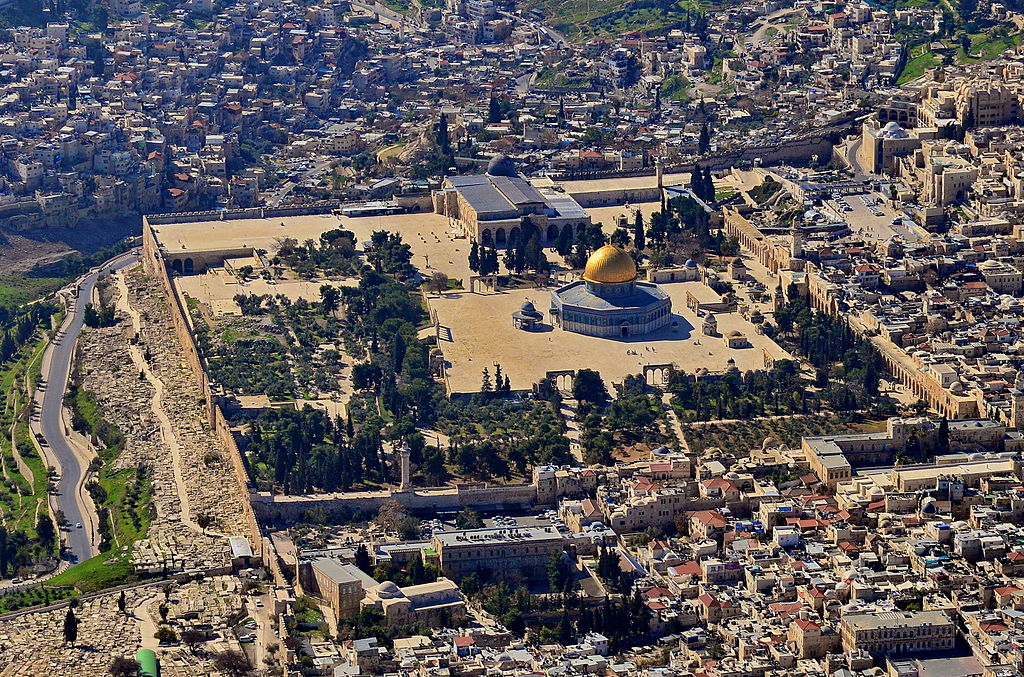 The most impressive of all of Herod’s building projects was certainly the renovation of the Jerusalem Temple. According to the biblical book of Ezra (ch. 6-7) the Second Temple which was built in the late 6th century BCE by the returned Babylonian exiles was a much smaller structure than the First Temple built by Solomon. Five hundred years after its construction, the Second Temple was really in need of work. Herod wanted to overhaul the site, making it a world-famous temple, but could not disrupt the daily sacrifices and worship that took place within the sanctuary. As he did in Hebron, Herod expanded the surface area of Mount Moriah by building a series of retaining walls around the hill. This effectively hid the mountain beneath a box which served as a platform for massive new structures including covered porticoes. Ingeniously, the construction of this box did not tamper with the epicenter of the hill, the “Foundation Stone” upon which the inner sanctum of the Temple (the “Holy of Holies”) was built. Although the Jerusalem Temple was destroyed in 70 CE and never rebuilt, the Herodian platform is still in place today, as seen in the photo above. It serves as the foundation for numerous Muslim buildings including Al Aqsa mosque (grey dome) and the Dome of the Rock (gold dome).

I hope you have enjoyed visiting this first set of five sites. Join me next week for another fascinating group of five!

Visit these websites for further reading: