The Land of Israel can feel like paradise for many Christian pilgrims. Within a relatively small area, one can visit dozens of world famous churches built upon the very sites where events mentioned in the Bible actually took place. Among these famous churches, one of the least visited (indeed few people have even heard of it) is called the Church of the Kathisma. The name Kathisma means “seat” in Greek, derived from the verb “to sit down” (καθίζω). As we will soon see, the church commemorates the “sitting down” of Mary, an event not recorded in Scripture. In its Byzantine heyday (5th-6th centuries CE), this was one of the most celebrated Christian sites in the country. Particularly impressive is the fact that it is perhaps the first church in the world dedicated to the figure of the Virgin Mary. Let’s take a closer look at what exactly this church commemorates. 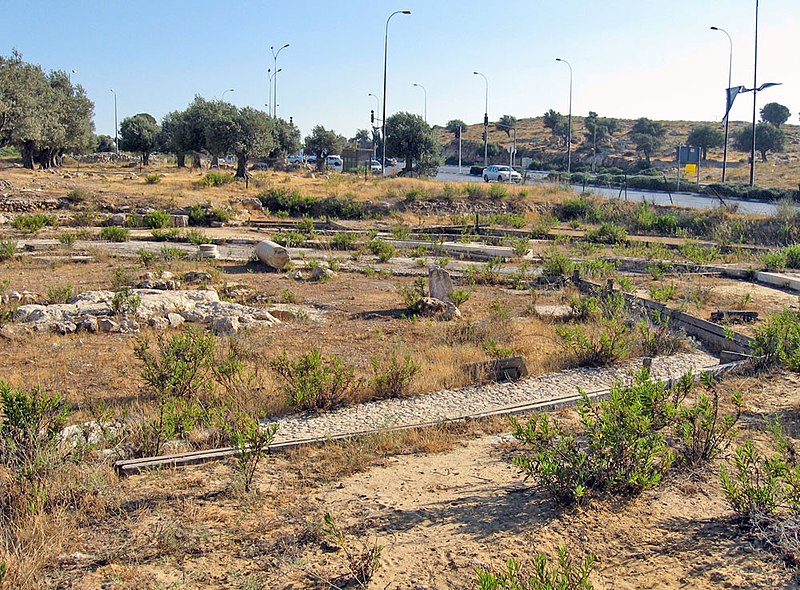 Every day scores of tour buses drive back and forth between Bethlehem and Jerusalem along Highway 60, also known as Hebron Road. The well-known churches in these two cities, commemorating the birth and death of Jesus (respectively), are major attractions that no Christian pilgrim skips. Oddly, no one stops to visit the important church found directly midway between these two cities: the Church of the Kathisma. Many centuries ago it was one of the most famous Christian sites in the entire country. The structure of the church consisted of several concentric octagons built around a very sacred rock, which you can see in the picture above. According to local tradition, this is the very seat upon which a very pregnant Mary sat down to rest on her way to Bethlehem prior to the birth of Jesus. If you are scratching your head wondering where exactly this event appears in the Bible, do not worry! 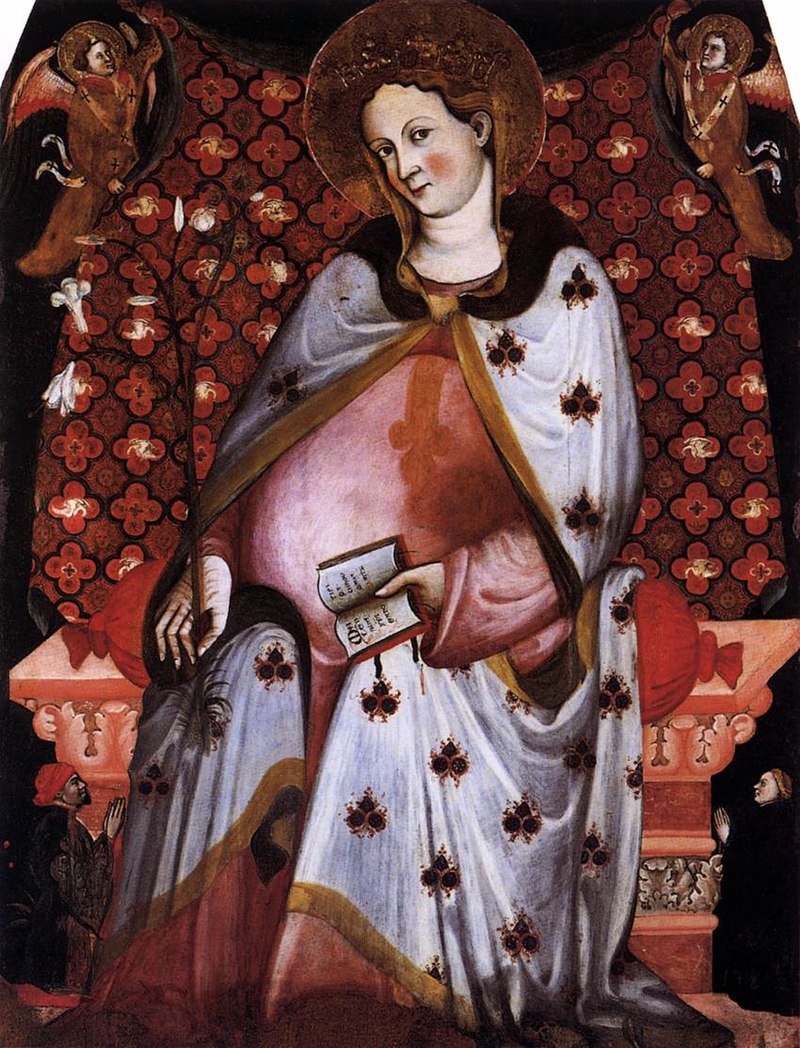 A 15th century painting of Mary pregnant by an unknown painter. In Italian, this style of painting is called “Madonna del Parto”

The scene is not mentioned in the canonical Gospels, but it is found in the apocryphal Protoevangelium of James, a highly popular 2nd century text that did not make it into the canon of the New Testament. It contains popular miracle stories from the period of the childhood of Jesus, about which the canonical Gospels are almost entirely silent. The Protoevangelium of James takes the outline of the Nativity story from Luke chapter 2 and fleshes it out, adding fascinating extra information. Joseph and Mary make the long trip from Nazareth south to Bethlehem in order to be counted in the empire-wide census. At the very end of the journey, just three miles from their final destination:

Joseph turned and saw her sorrowful; and he said to himself: Likely that which is in her distresses her. And again Joseph turned and saw her laughing. And he said to her: Mary, how is it that I see in your face at one time laughter, at another sorrow? And Mary said to Joseph: Because I see two peoples with my eyes; the one weeping and lamenting, and the other rejoicing and exulting. And they came into the middle of the road, and Mary said to him: Take me down from off the ass, for that which is in me presses to come forth. And he took her down from off the ass, and said to her: Whither shall I lead you, and cover your disgrace? For the place is desert. And he found a cave there, and led her into it; and leaving his two sons beside her, he went out to seek a midwife in the district of Bethlehem  (Protoevangelium of James 17-18). 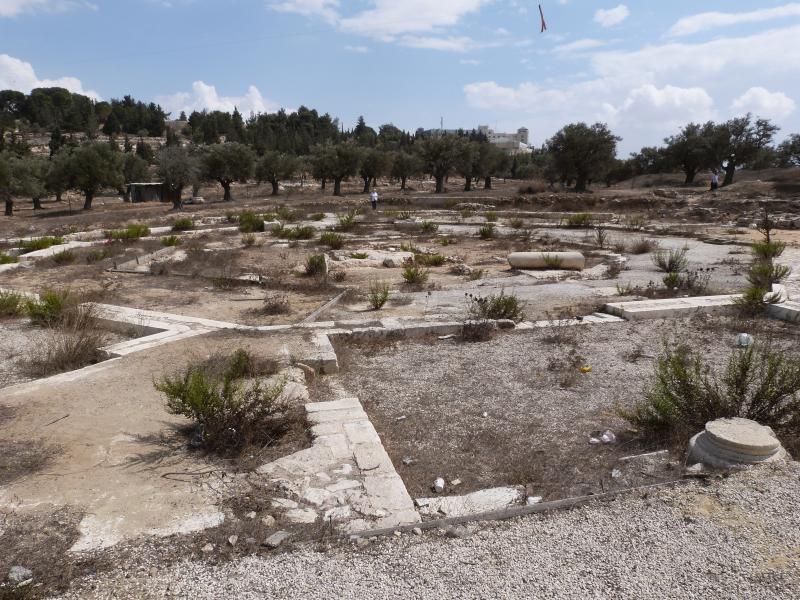 Apparently, the story of Mary dismounting to rest three miles from Bethlehem was widely known in antiquity. It was popular enough among ancient Christians that in the mid-5th century a wealthy widow named Ikelia decided to built a massive church commemorating the event. The construction of the church is recorded in the Life of Theodosius written by the 6th century hagiographer, Cyril of Scythopolis. It is likely that the date of the construction of the church (456) is the result of an important ecclesiastical resolution passed several years earlier. In 431, at the Council of Ephesus, is was formally decided that Mary should be referred to as the Theotokos (Θεοτόκος), “the one who gave birth to God”, a firm statement that Mary was not merely the mother of Jesus. Given this augmented veneration of Mary in the 5th century, it makes sense that a church devoted entirely to Mary was built a few years later.

A painting of St Theodosius the Cenobiarch, from the Hosios Loukas Monastery, Boeotia, Greece

A century after the completion of the church, we hear an account of a visit to the site by a Christian pilgrim from the city of Piacenza (570 CE):

On the road that leads to Bethlehem, three miles from Jerusalem, Rachel rests bodily, on the outskirts of Rama. There, in the middle of the road, I saw standing water coming out of a rock, to be taken at one’s discretion up to seven pints; everyone takes their fill and it never diminishes nor becomes more full. It is of an indescribable sweetness to drink; they say that, when Saint Mary was fleeing to Egypt, she sat on this spot and became thirsty, and so this water came forth. A small church was built there. (Piacenza 28; Translation by Andrew Jacobs)

Today, the Kathisma is no longer a functioning church. It is merely a neglected archaeological site located on the side of Highway 60, the road between Jerusalem and Bethlehem. It was discovered by chance in 1992 when the Jerusalem Municipality attempted to widen the highway and came across the archaeological remains of a Byzantine church. The existence of a Byzantine church known as the Kathisma had long been known from textual references, but the actual site had never been definitively found. Until the 1992 discovery, it had always been assumed that the Kathisma was part of the Byzantine era remains at nearby Kibbutz Ramat Rachel. The Arabic name – Bir Kadismu – of a water reservoir located nearby, preserves the name Kathisma.

One of the mosaic carpets that adorned the floor of the Church of the Kathisma. Courtesy of the Israel Antiquities Authority https://he.wikipedia.org/wiki/%D7%A7%D7%95%D7%91%D7%A5:Kathisma55.jpg

The truly fascinating thing about this church is the influence that its unique design exerted on Byzantine church architecture throughout the country. In the wake of Kathisma’s successful octagonal shape, several other octagonal churches were built: Capernaum, Caesarea, and Mount Gerizim.

Even more interesting is the suggestion that the Kathisma influenced the design of one of the earliest Muslim buildings in the world: the Dome of the Rock, an octagonal shrine built over the rock from which Mohammed ascended to heaven. It seems quite likely that the Christian builders responsible for the Dome of the Rock had an existing building in mind when they created this famous building. Could this inspiration have come from the Church of the Kathisma?