What Is So Bad About The East Wind?

If you read the news from Israel regularly, you know that the last few days here (beginning Nov. 22, 2016) have been marked by widespread wildfires. Although it is still unclear what started these fires (a wave of terrorist arson is suspected), there is no doubt what has allowed them to spread so quickly: strong dry winds from the east. Above and below are images of wildfires in Israel in recent years, most notably the Mount Carmel wildfire (December 2010). It is common for such fires to take place in the autumn months, when the countryside is parched from the long dry summer.

In the Land of Israel, winds normally blow from the Mediterranean Sea inland, in an eastward direction. This has the positive effect of bringing cool moist air (and rain during the winter months) to the entire country. However, the opposite can also happen. When the winds blow from the Arabian desert region westwards, the result is very unpleasant. Hot dry winds distribute a caustic blanket of dust across the entire country. The minute grains of desert dust kill crops and get into every crevice making breathing very difficult.  The image below is a satellite photograph showing a massive cloud of dust from the Arabia desert (bottom) headed for Israel (top) on May 13, 2005. 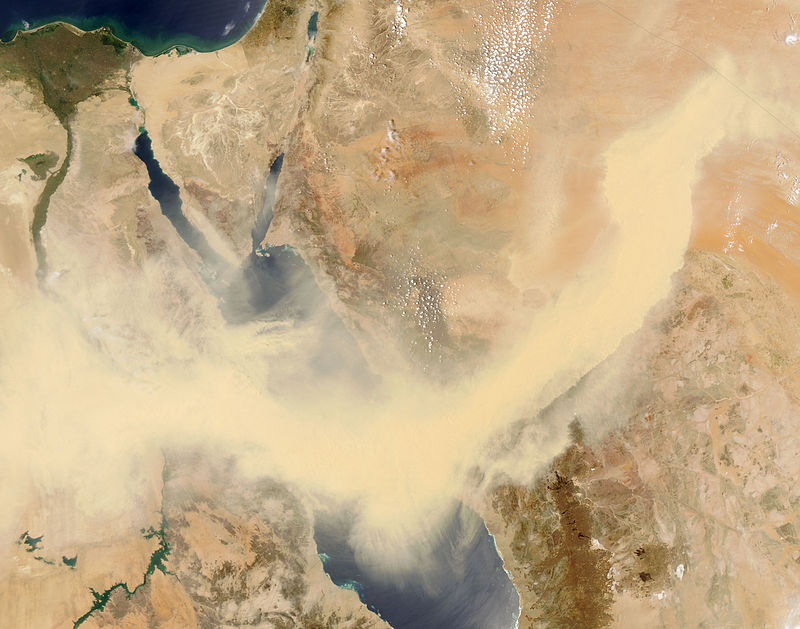 The common Hebrew word for wind is ruah (רוּחַ), which can also have the figurative meaning of “spirit”. But there is a special word for the eastern wind: kadim (קָדִים), which comes from the root KDM (קדם) meaning “east” or “in front of”. This is because in the mindset of the people of the Bible, one stands eastwards looking towards the rising sun. Therefore, in some places in the Bible the word for north is “left” and the word for south is “right”. The same is true in modern English, where we use the word “orient” to refer to getting ourselves geographically situated. The word “orient” comes from the Latin for “rising” and refers to the east, where the sun rises. By the way, this type of deadly east wind is well-known around the Mediterranean Basin. In Italy, for example, the dry desert east wind is called sirocco, which comes from the Arabic word for east, sharqui.

The prophets of the Hebrew Bible knew this phenomenon well, and alluded to it as part of their visions of catastrophe. In this blog post I would like to take a look at a few biblical verses that mention such strong east winds.

(1) The prophet Hosea predicts that due to the idolatry and sinfulness of the people of Israel, God will punish them. This punishment will be unexpected and quick, similar to the way in which the east wind suddenly covers the entire Land of Israel with dust, drying up natural sources of water.

Although he may flourish among rushes, the east wind shall come, a blast from the Lord, rising from the wilderness; and his fountain shall dry up, his spring shall be parched. It shall strip his treasury of every precious thing. (Hosea 13:15)

Notice how the prophet very clearly notes that this type of destructive wind comes from the “wilderness”, that is the Arabian desert to the east of the Land of Israel. 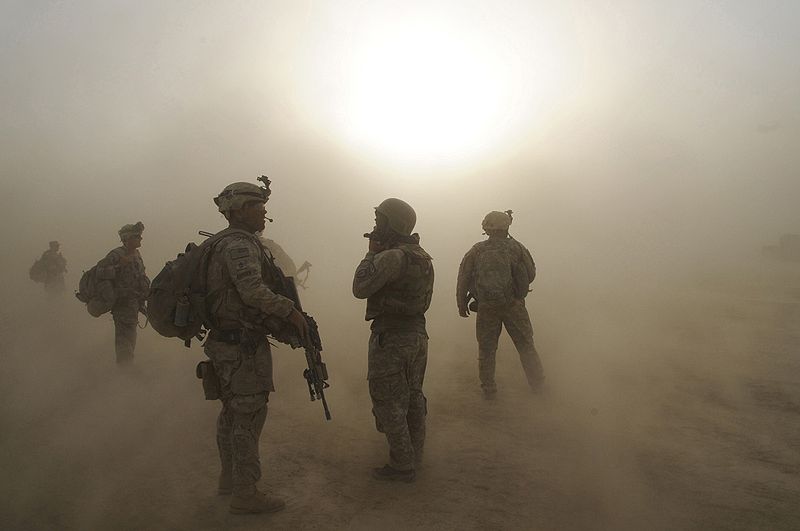 (2) In the Book of Genesis, Joseph is imprisoned in Egypt and becomes famous for interpreting dreams. Pharaoh asks Joseph to analyze the following dream:

“I fell asleep a second time and I saw in my dream seven ears of grain, full and good, growing on one stalk, and seven ears, withered, thin, and blighted by the east wind, sprouting after them; and the thin ears swallowed up the seven good ears. But when I told it to the magicians, there was no one who could explain it to me.” (Genesis 41:22-24)

Joseph correctly understands that this dream signifies seven years of famine. Although this story is set in Egypt, and not in the Land of Israel, the phenomenon is the same. Dry winds from the Sahara (south) or the Arabian (east) desert blow counter to the normal winds and have disastrous effects on agriculture.

(3) In the following passage, Job laments how cruel life can be, how easily people can lose all their worldly possessions in the blink of an eye. One day they are happy and wealthy and the next day, they have absolutely nothing left. To illustrate his point, Job compares God’s instantaneous punishments to the sudden terrifying power of a windstorm. Notice how vivid Job’s description is, including the hissing sound

“The east wind lifts them up and they are gone; it sweeps them out of their place. It hurls at them without pity; they flee from its power in headlong flight. It claps its hands at them, and hisses at them from its place.” (Job 27:21-23)

(4) In this passage, the prophet Ezekiel laments the destruction of the Kingdom of Judah at the hands of Babylon by alluding to a vineyard attacked by the east wind:

Your mother was like a vine in a vineyard transplanted by the water, fruitful and full of branches from abundant water. Its strongest stem became a ruler’s scepter; it towered aloft among the thick boughs; it stood out in its height with its mass of branches. But it was plucked up in fury, cast down to the ground; the east wind dried it up; its fruit was stripped off, its strong stem was withered; the fire consumed it. (Ezekiel 19:10-12)

Notice how Ezekiel refers to the “east wind” as well as “fire”. This is the precise combination that we are observing in the wildfires taking place right now in Israel. 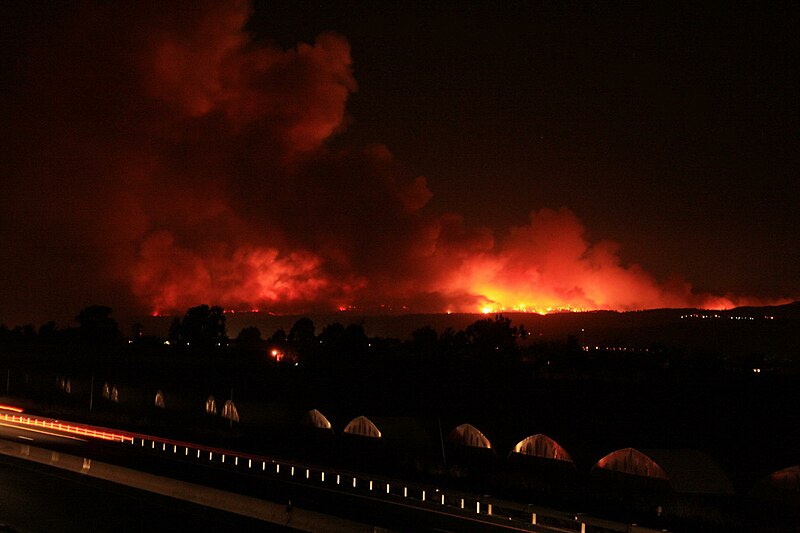 (5) In these verses the prophet Isaiah compares the just rule of the future ideal king to the shelter provided to the traveler during a windstorm. Unlike the corrupt kings of the present era who oppress the people, the future messianic king will offer relief. Isaiah’s metaphors are all drawn from the natural realia – rocks, streams, wind and rainstorms – which he personally observed in the Land of Israel.

“See, a king will reign in righteousness, and princes will rule with justice. Each will be like a hiding place from the wind, a covert from the tempest, like streams of water in a dry place, like the shade of a great rock in a weary land.” (Isaiah 32:1-2)

(6) In the following chapter of Psalms, the speaker wishes he could run away from the evils of the present and find shelter in the wilderness. Interestingly, he compares the difficult circumstances he is undergoing to the same two phenomena seen in the previous verse: windstorm and tempest.

And I say, “O that I had wings like a dove! I would fly away and be at rest; truly, I would flee far away; I would lodge in the wilderness; Selah. I would hurry to find a shelter for myself from the raging wind and tempest.” (Psalm 55:6-8) 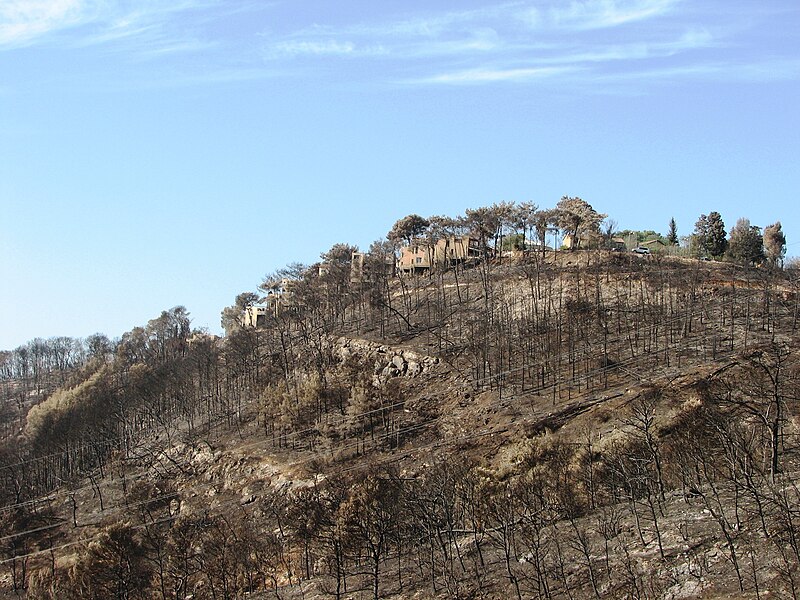 The Holy Land Studies Blog is devoted to the idea that the Bible is brimming with references to real life natural phenomena which are specifically characteristic of the Land of Israel. As you saw in this post, the “east wind” is just one example. Although many of these natural climatic and geographical features exist elsewhere in the world, to truly understand the meaning of these Scriptural references, you really need to situate yourself in the same particular context in which the Bible was actually written. Thank you for reading!