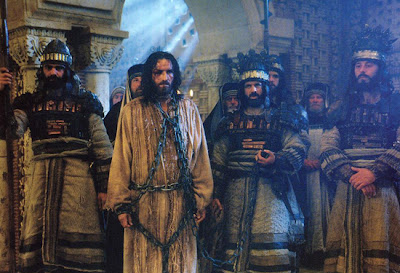 32 The Pharisees heard the crowd muttering these things about him, and the chief priests and Pharisees sent officers to arrest him.

The author of John makes a very interesting point in this verse. Before the feast of tabernacles people were afraid to talk about Jesus because they were afraid of hoi Ioudaioi. (John 7.13)  However, when Jesus began to openly teach in the Temple, the public debate about him could no longer be contained. (John 7:27-31) The Pharisees who witnessed this debate take place in the Temple sent out the Temple guard to make an arrest (vs.32). The Pharisees had the full cooperation of the chief priests. Notice that the “chief priests together with Pharisees” were the very authorities whose powers were enough to dispatch the Temple police to make a criminal arrest of Jesus.

Now let us recall (read more here) an early reference to an exercise of power against John the Baptist: “19 And this is the testimony of John, when the Jews (hoi Ioudaioi) sent priests and Levites from Jerusalem to ask him, “Who are you?” … (Now they had been sent from the Pharisees.) 25 They asked him, ‘Then why are you baptizing, if you are neither the Christ, nor Elijah, nor the Prophet?’” (John 1:19-25)

We see something similar at play in both of these events. In the both cases, sending the priestly committee and sending the Temple guard, the Pharisees were involved (John 7:32 and John 1:24). However, in both places they were not alone. It is hoi Ioudaioi (John 1:19) and chief priests together with Pharisees (John 7:32) who acted together. I, therefore, conclude that at least one sense in which hoi Ioudaioi (translated as “the Jews”) is used here is to show that there is a basic characteristic as authorities.

To receive more information about learning Biblical Languages with Hebrew University of Jerusalem/eTeacher Biblical program online at affordable cost, please, click here. If you would like to pray for this and other projects, please, email Dr. Eli at Eli.Lizorkin@eteachergroup.com

When the Pharisees and chief priests dispatched the Temple Guard to arrest him, Jesus was addressing the crowd who were in the middle of a public debate focused on him (John 7:27-31). He told them that his time with them was almost over. He would then return to Him who sent him. Notice the power play here. Hoi Ioudaioi are exercising their authority to send the Temple police to arrest Jesus, but Jesus is saying that he was sent out by someone who is the ultimate authority – Israel’s God Himself (vs.33). Moreover, the place to which Jesus was departing was unapproachable and He could not be followed. (vs.34) Hoi Ioudaioi who remained in the crowd (but separate from it) wondered about the words of Jesus (vs.35), hypothesizing that Jesus was planning to go outside of areas of their control, to the Greek-speaking and Hellenized Israelites geographically located outside of Judea and Jewish Galilee.

To understand what is going on here we must take a little structural linguistic detour. Just like the word Ioudaios (usually translated as a Jew) did not refer exclusively to a religion or ethnicity, but to the all-encompassing way of living, thinking and especially group behavior. The word Hellenismos (translated as a Greek) also did not refer exclusively to ethnicity or religion. Words like Medismos (acting like a Persian), Laconismos (acting like a Spartan) or Atticismos (acting like an Athenean) along with Hellenismos and Ioudaios do not only refer to religions or ethnicities. Incidentally, both categories (religion and ethnicity) are late Western/Christianized categories only anachronistically used as first century terms. This is a very important point since it helps us understand the world of Jesus in its context. Terms like Hellenismos and Ioudaioi (among others) refer to an entire group context having to do with political loyalties, ancestral practices, common language, dress, and a multitude of other factors.

One very interesting verse that adds to  this discussion comes from Nehemiah 2:16. There we read that Nehemiah said about the work of Temple rebuilding: “And the officials did not know where I had gone or what I was doing, and I had not yet told “the Jews” (Hebrew Yehudim is a rough equivalent of Greek Ioudaioi), the priests, the nobles, the officials, and the rest who were to do the work.” It is obvious that the priests, the officials and the rest of the Jewish people that were about to undertake the project were in our modern (and even modern religious) sense of the world Jewish. But Nehemiah distinguished between them and another group that he called “Yehudim” (Ioudaioi in Greek).

All of this structural linguistics discussion was important to make the point that when Ioudaioi said they thought that perhaps Jesus was planning to go to Hellenisimoi (vs.35) (translated as Greeks) it is very possible that they did not mean Greek Gentiles. This is the usual assumption in most Christian translations of the Gospel. It is also possible that they meant Israelites who lived outside of Israel. Most importantly, this means that they, the Hellenisimoi, were fully outside of Jerusalemite, Judean control. Examples of such lack of control by hoi Ioudaioi are plentiful. Already in Jewish Galilee there were many synagogues that were not oriented (in their direction of worship) to Jerusalem. One very curious case is found in Elephantine (an island in the Nile River in Southern Egypt) where a mixed Jewish-Samaritan/Israelite mercenary military colony was stationed from around 650 BCE. The island boasted its own alternative to the Jerusalem Israelite Temple. According to Josephus, there was also another Temple somewhere in Egypt (Antiq. Book XIII. ch. 3. sect. 1-3, and Of the War, Book VII. ch. 10. sect. 8.). According to Josephus, those Temples were built to resemble the one in Jerusalem, administrated by legitimate priests, and they actually conducted sacrificial offerings.  In other words, we do not have a normal synagogue here which is the house of prayer, study and community, but a real temple where sacrificial services regularly took place.  There are interesting other factors as well.

Not a very well known, but a very important Isaianic prophecy was believed by many to have been fulfilled in Egypt (Is.19:19-25). The prophecy of Isaiah[1] read as follows:

19 In that day there will be an altar to the Lord in the midst of the land of Egypt… They will even worship with sacrifice and offering, and will make a vow to the Lord and perform it… 24 In that day Israel will be the third party with Egypt and Assyria, a blessing in the midst of the earth, 25 whom the Lord of hosts has blessed, saying, “Blessed is Egypt My people, and Assyria the work of My hands, and Israel My inheritance.”

However, we must keep in mind that Babylonian Talmudic references that are positive regarding non-Jerusalemite Temples do not reflect 1st century views. The views of Jerusalem Temple 1st century authorities have got to be negative, after all they also, like Jesus, challenged the power and control of the Judean priestly elite (and their supporters) who were headquartered in Jerusalem and Judea.

To receive more information about learning Biblical Languages with Hebrew University of Jerusalem/eTeacher Biblical program online at affordable cost, please, click here. If you would like to pray for this and other projects, please, email Dr. Eli at Eli.Lizorkin@eteachergroup.com

[1] The Jewish Masoretic Text (MT), the text generally used by Christian Bibles, has one more verse before the prophecy quoted above, where it purposely charges the name of the City of Sun (the likely original) to the City of Destruction (a translation that makes no sense at all given the positive context of the prophecy). We read there: “In that day there will be five cities in the land of Egypt that speak the language of Canaan (Land of Israel) and swear allegiance to the Lord of hosts (Israel’s God). One of these will be called the City of Sun (changed in the Masoretic version to ‘Destruction’).” What is striking is that both scrolls of Isaiah found in Qumran (Dead Sea Scrolls) and the texts of Isaiah in the Septuagint (the Greek translation of Old Testament) confirm that in the Hebrew original version, this was the City of the Sun and not the City of Destruction. The reason for this is that both Qumran and the Septuagint predate the Masoretic texts by many centuries. The Masoretic texts are later and are not Jerusalemite in origin.