Is A Donkey Suitable For The Messiah?

In  many languages, the word “donkey” (or its older form “ass”) is commonly used to refer to a fool, a person who is so stubborn that their very intelligence is called into question. For example, in Farsi the word for donkey (olagh), is a common way of saying “stupid person.” Similarly, in Spanish the word pollino is used for a “rude, unsophisticated or ignorant person.” These are just two examples. There are dozens more in other languages. The underlying assumption among the speakers of all these languages is that donkeys are unintelligent. It is unclear why; perhaps due to their large ears or their obstinate disposition. Interestingly, this assumption was not found among the ancient Israelites, the people responsible for compiling the Hebrew Bible. Let’s take a closer look at the reputation of the humble donkey in the Bible.

The most common word for donkey in the Hebrew Bible is hamor (חמור), although the female aton (אתון) and the young ayir (עיר) both appear as well. The word hamor derives from the root HMR meaning “red”, perhaps in reference to its reddish-brown coat. The donkey is not indigenous to the Land of Israel; it was brought from the Horn of Africa by traders thousands of years ago. The most common species of donkey found in the Bible is the domestic ass (Equus asinus).

An etching of two men and their donkey resting beneath a eucalyptus tree near Jaffa, from The Holy Land and the Bible; (1888)

Surprisingly, in the Bible we do not find negative depictions of donkeys as seen in Greek culture. The donkey was considered dependable, strong and devoid of finickiness. His tough hide makes him durable in averse conditions and his small hooves make him an expert climber. Importantly, the donkey is able to drink a large amount of water quickly and retain it, as attested in Psalm 104: “He sends forth springs in the valleys; They flow between the mountains; They give drink to every beast of the field; The wild donkeys quench their thirst.” 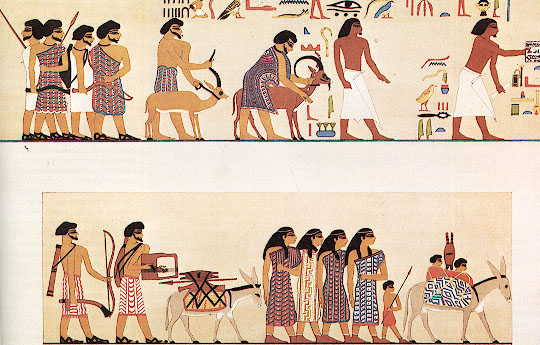 A detail from the tomb of Khnumhotep II, an aristocrat buried in the Beni Hasan cemetery in Middle Egypt. This painting depicts a family of nomadic traders entering Egypt from Canaan in the 19th cent. BCE. This is a very rare depiction of ancient Semites, dressed in colorful tunics, as opposed to the Egyptians wearing only white waistcloths. Perhaps they have come to buy grain. The man bending over the ibex is named “Abisha the Hyksos” according to the inscription. Note the donkeys on the bottom register.

The donkey was the main plowing and transportation animal for the patriarchs in the Book of Genesis. For example, the famous story of the Binding of Isaac begins with the words “early the next morning Abraham got up and loaded his donkey (חֲמֹרוֹ)” (Genesis 22:3).

Moreover, the Bible is replete with examples of donkeys being a symbol of wisdom. Jacob’s deathbed blessing to his son Issachar is as follows:

Issachar is a strong-boned donkey
lying down among the sheep pens.
When he sees how good is his resting place
and how pleasant is his land,
he will bend his shoulder to the burden
and submit to forced labor.

Although this blessing does not initially sound positive, Jacob is actually saying something very appropriate to his son. The tribe of Issachar settled in the beautiful Jezreel Valley (“how pleasant is his land”), located southeast of the Lower Galilee. This is one of the most fertile regions in the land, often referred to as the “Breadbasket of Israel.” Not surprisingly, the people of Issachar have chosen to lead the difficult but rewarding life of agriculture (“bend his shoulder to the burden”). In this passage the donkey is not stupid or stubborn; he is “strongboned” (garem) and hand-working.

Another well-known passage in the Hebrew Bible that depicts a donkey favorably is the story of Balaam and Balak in Numbers chapters 22-24. Balaam, the sorcerer hired to curse the Israelites by King Balak, is riding his donkey towards the Kingdom of Moab when the following comical scene takes place: 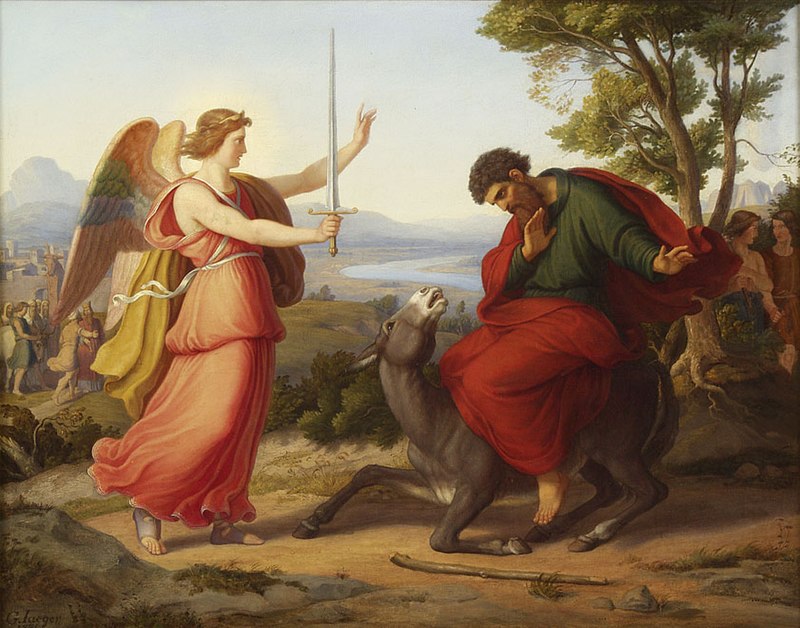 The donkey in this story is certainly no fool; he is wisest character in the story. Neither Balaam nor his servants can understand what is going on, and so the donkey has no choice but to spell it out for them in their own language. He uses sophisticated Hebrew words and absolutely correct grammar.

Am not I thine ass, upon which thou hast ridden all thy life long unto this day? was I ever wont to do so unto thee?’

The land of Moab, on the eastern side of the Jordan, where King Balak reigned and to which Balaam was summoned. The body of water in the center is the Arnon River, which is known as Wadi Mujib in Arabic.

We are supposed to be impressed by the eloquence of the donkey, as well as his perceptiveness, since he is the only character that is able to recognize the angel of the Lord. All the others are blind to this spiritual reality. The story is mentioned in 2 Peter, comparing the way of sinners to the path followed by Balaam:

Accursed children! They have left the straight road and have gone astray, following the road of Balaam son of Bosor, who loved the wages of doing wrong, but was rebuked for his own transgression; a speechless donkey spoke with a human voice and restrained the prophet’s madness. (2 Peter 2:15-16)

Given this positive image of the donkey in the minds of ancient Israelites, it is not surprising that in the later books of the Bible the donkey became the animal who would usher in the messianic era. The prophet Zechariah envisioned the future messianic king riding into the city on this most humble of animals:

Rejoice greatly, O daughter Zion!
Shout aloud, O daughter Jerusalem!
Lo, your king comes to you;
triumphant and victorious is he,
humble and riding on a donkey (חֲמוֹר)
on a colt, the foal of a donkey (עַיִר בֶּן-אֲתֹנוֹת).
He will cut off the chariot from Ephraim
and the war-horse from Jerusalem;
and the battle bow shall be cut off,
and he shall command peace to the nations;
his dominion shall be from sea to sea,
and from the River to the ends of the earth. (Zech. 9:9-10)

This passage serves as the primary inspiration for the famous Palm Sunday triumphal entrance of Jesus into Jerusalem. Although Zechariah 9:9 indeed mentions two animals (a donkey and a foal), he very likely did not mean to refer to two separate animals. Rather, this is an example of a common style of poetic repetition known as “parallelism” found throughout the Hebrew Bible. Nevertheless, the Gospel of Matthew takes this doubling quite literally and depicts Jesus riding on both a “donkey and a colt” (Matt. 21:7). It is hard to visualize how exactly Jesus would have managed to do this. Understandably, the other three canonical Gospels do not agree with Matthew, choosing instead to place Jesus on a single animal (see Mark 11:4; Luke 19:33; John 12:14). The image of a conquering king riding on a humble donkey is a drastic departure from the normal image of a conquering king on horseback. But this is precisely the point: whereas the horse is an animal of war fit for an earthly king, the donkey is an animal of peace fit for a heavenly king. 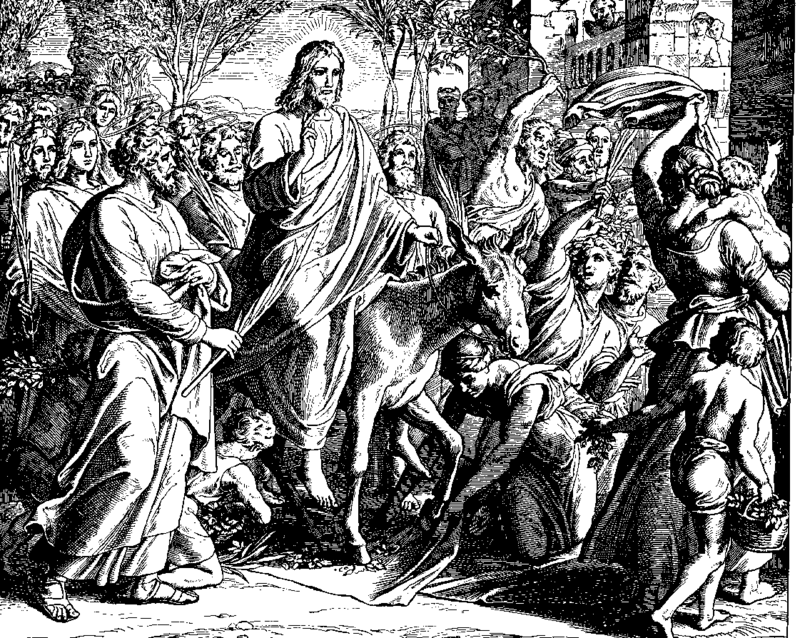