What Does The Bible Say About Sports?

By Jonathan LipnickOctober 26, 2016No comments

The recently retired US marathoner Ryan Hall is very outspoken about his faith. In numerous interviews, he speaks very publicly about how his Christian faith has been instrumental in guiding his running career. Examples of how Hall uses the Bible to guide his training include the following:

He takes one day off a week, just as God rested on the seventh day. Every seven weeks, for restoration he runs only once a day instead of twice, an allusion to Exodus 23:11 and the admonition that farmers should leave their fields fallow every seventh year. At night, he rubs his legs with anointing oil, another reference to Exodus and the belief that the human body is the temple of the Holy Spirit. Hall bought — but did not immediately use — a weighted vest for uphill running, an idea gleaned from Judges 16:3 and Samson hoisting the doors of the city gate of Gaza on his shoulders and carrying them to the top of the hill facing Hebron. (New York Times, July 14, 2012)

Hall is hardly alone; it is increasingly common for professional Christian athletes look to the Bible not just for religious guidance but for training assistance. One need not look very hard. The New Testament is full of verses comparing the spiritual struggle of Christians to the physical struggle of an athlete. For example, Paul writes to the Corinthians:

Do you not know that in a race the runners all compete, but only one receives the prize? Run in such a way that you may win it. Athletes exercise self-control in all things; they do it to receive a perishable wreath, but we an imperishable one. So I do not run aimlessly, nor do I box as though beating the air; but I punish my body and enslave it, so that after proclaiming to others I myself should not be disqualified. (1 Cor. 9:24-27)

It is not surprising that Paul speaks this way here and in other places. His letters and most of the New Testament were written in the eastern Roman Empire of the 1st century, which was a highly Hellenized sphere of influence. Greek culture pervaded every aspect of daily life. Athletic games were very popular in this part of the world, and so the authors of the New Testament used sports as an analogy which they knew their audiences would understand. In the verses quoted above, Paul is likely alluding to the Isthmian Games, which were held near Corinth every other year. His Corinthian audience was no doubt familiar with the “perishable wreath” given to the winning runner. 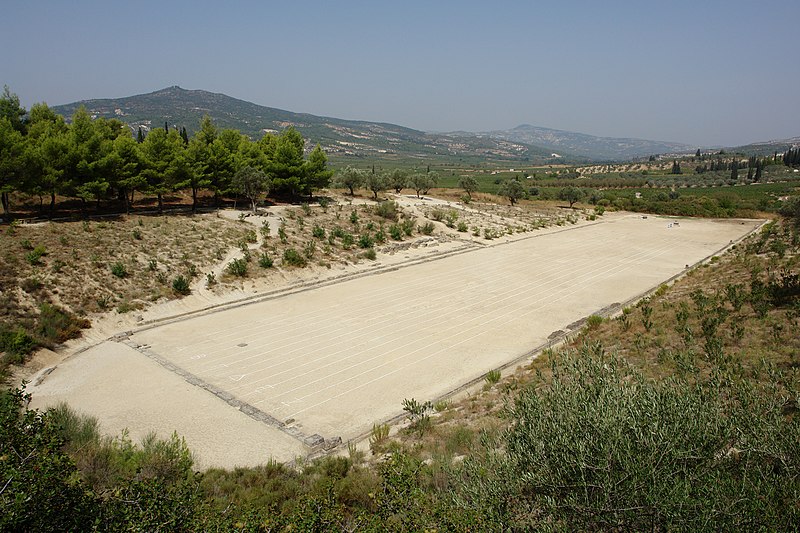 The Greek stadium at Nemea, near Corinth

But the situation is very different in the Hebrew Bible (Old Testament). The world of ancient Israel did not contain a rich athletic heritage, like that of the Greeks. The prophets of the Hebrew Bible were much more likely to employ metaphors from the world of agriculture or warfare to illustrate their spiritual lessons. Nevertheless, there are a handful of places in the Hebrew Bible that do reference athletics. For example, when Jeremiah complains to God that the world is unfair because the “the way of the guilty prospers,” God utters the following response:

If you have raced with foot-runners and they have wearied you, how will you compete with horses? And if in a safe land you fall down, how will you fare in the thickets of the Jordan? (Jer. 12:35)

God tells Jeremiah that if he cannot contend with the minor critiques of his own neighbors in Anathoth (foot-runners), how will he deal with the much larger critiques of the people in the capital of Jerusalem (horse-racing)? Things are only going to get worse, so stop feeling sorry for yourself.

The village of Anata – just outside of Jerusalem in the direction of the Dead Sea – preserves the biblical name of Jeremiah’s hometown of Anathoth.

Did the sports of running and horse-racing exist in ancient Israel? It is difficult to say. There is not much textual or archaeological evidence that the Israelites themselves engaged in organized athletic competition. Most of the verses in the Hebrew Bible that mention swift runners (2 Sam. 2:18) or accurate archers (Job 16:12) are referring to battle contexts, not leisure or organized athletic competition. However, the large neighboring empires of Egypt and Babylon certainly did engage in organized sports. Perhaps in the verse quoted above Jeremiah is drawing on his knowledge of these foreign cultures. Perhaps due to the striking “foreignness” of sports such as running and horse-racing, the Israelites frowned upon them. Or perhaps due to the precarious state of warfare that the Israelites frequently found themselves in, they did not allow themselves to develop a tradition of athletic leisure. Either way, it is instructive that in one of the most beautiful psalms, the speed of a runner is employed as an apt metaphor for the powerful sun quickly moving across the horizon:

In the heavens [God] has set a tent for the sun, which comes out like a bridegroom from his wedding canopy, and like a strong man runs its course with joy. Its rising is from the end of the heavens, and its circuit to the end of them; and nothing is hid from its heat. (Psalm 19:4-6)

Images of ancient Egyptian wrestlers from Beni Hassan tomb no. 15