Perhaps Agonizing Is Not So Terrible

By Jonathan LipnickNovember 29, 2016No comments 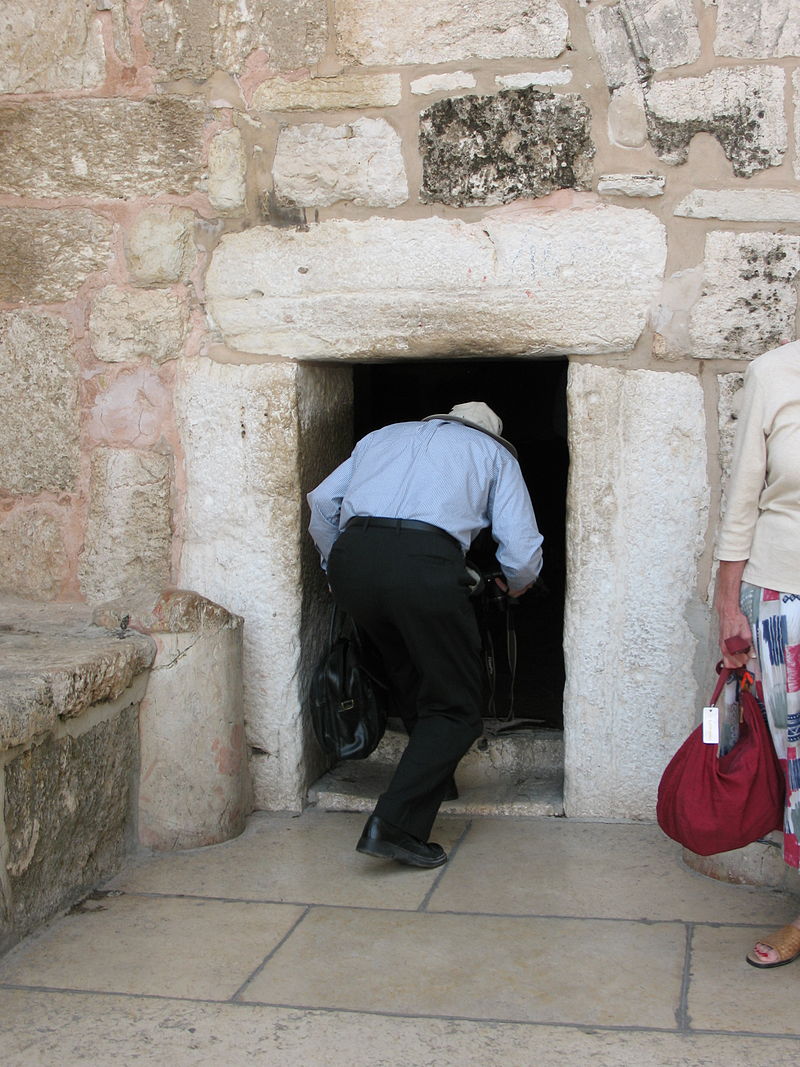 The main entrance to the Church of the Nativity in Bethlehem

Appearing towards the end of the Sermon on the Mount, Jesus’ teaching about the “narrow gate” is a familiar passage for many Christians:

His message is that entering the kingdom of heaven is not easy. Unlike the comfort of “walking on the broad road”, “entering the narrow gate” requires discipline, strength and bravery. In Matthew’s version of the teaching, Jesus says simply “enter through the narrow gate” (Matthew 7:13). But in Luke’s version, there is more urgency:

Jesus went through one town and village after another, teaching as he made his way to Jerusalem. Someone asked him, “Lord, will only a few be saved?” He said to them, “Strive to enter through the narrow door; for many, I tell you, will try to enter and will not be able. (Luke 13:22-24)

The Lukan phrase “strive to enter through the narrow door” (Lk 13:24) differs from Matthew’s version in two ways. Firstly, Luke calls it a “door” (θύρα) rather than a “gate” (πύλη), which is not a very significant difference. Secondly, Luke adds the words “strive to” before the verb “enter”. This, by contrast, is a significant difference. The rather neutral English word “strive” is not nearly as interesting as the original Greek word which Luke uses: ἀγωνίζομαι (agōnizomai). This is a verb built on the root ἀγών (agōn), which means an athletic competition, such as a running race or a wrestling match. So Luke is basically saying “be as committed to winning as a champion athlete”. He chooses this word because he wishes to convey the sense of pain and struggle which is required of those who chose to follow Christ.

The English word “agony” which derives from the same Greek root also contains this sense of suffering and violence. It is interesting that in English the verb “to agonize” usually has a negative meaning, for example, “to worry excessively”. But in Greek it has the positive – even heroic – meaning of “to contend for a prize”. Luke uses this athletic term because he wishes to show that the suffering endured by Christians today will be followed by triumph reserved for the few tomorrow.

U.S. Army veteran and captain of the U.S. Invictus team Will Reynolds races to a finish line during the 2016 Invictus Games in Orlando, Fla. May 11, 2016. (DoD photo Edward Joseph Hersom II)

Ancient readers of the Gospel of Luke would have easily understood the athletic reference in this verse. The modern-day equivalent would be to use a well-known sports motto in a Christian religious context, for example: “Jesus: Just Do It”. Although this combination of two different worlds seems strange, it is very effective. Indeed the athletic imagery used by Luke is developed much further by Paul who uses the same verb in his description of the spiritual life as a running race or a fight:

Do you not know that in a race the runners all compete, but only one receives the prize? Run in such a way that you may win it. Athletes exercise self-control in all things; they do it to receive a perishable wreath, but we an imperishable one. So I do not run aimlessly, nor do I box as though beating the air; but I punish my body and enslave it, so that after proclaiming to others I myself should not be disqualified. (1 Cor 9:24-27).