Where Did Jesus Eat The Last Supper? 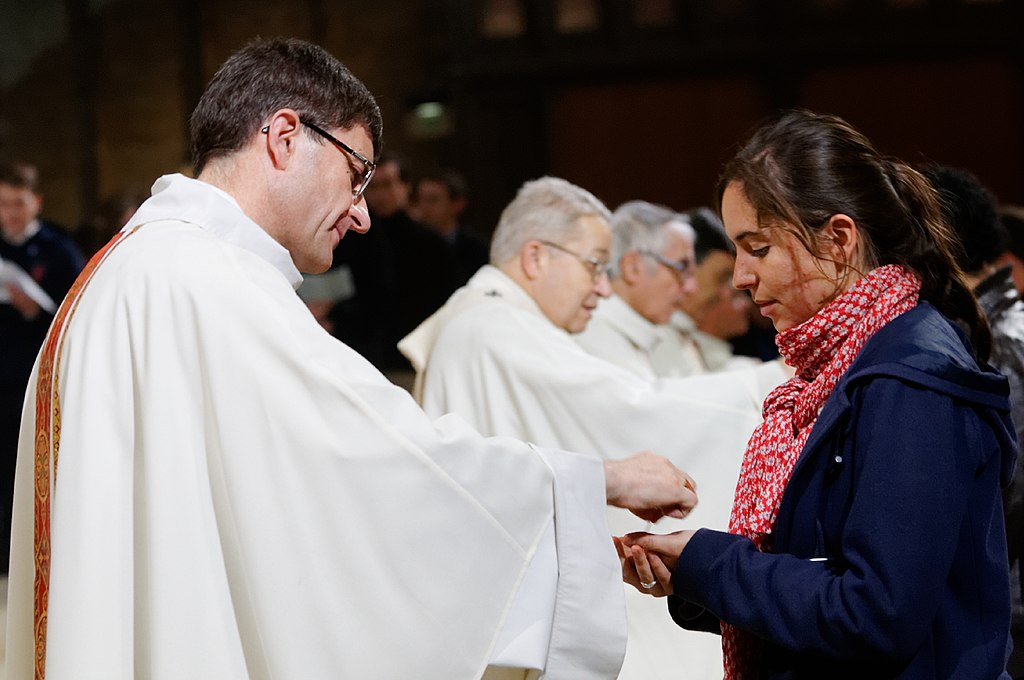 A woman receives communion as part of a Catholic Mass in Notre-Dame Cathedral, Paris

The Christian ritual of receiving bread and wine observed by billions around the world has many different names: holy communion, the Lord’s Supper, the Eucharist, to name a few. Despite contemporary denominational differences, the common root of this widespread ritual is the Scriptural account of the Last Supper, quoted here:

On the first day of Unleavened Bread, when the Passover lamb is sacrificed, his disciples said to him, “Where do you want us to go and make the preparations for you to eat the Passover?” So he sent two of his disciples, saying to them, “Go into the city, and a man carrying a jar of water will meet you; follow him, and wherever he enters, say to the owner of the house, ‘The Teacher asks, Where is my guestroom where I may eat the Passover with my disciples?’ He will show you a large room upstairs, furnished and ready. Make preparations for us there.” So the disciples set out and went to the city, and found everything as he had told them; and they prepared the Passover meal. When it was evening, he came with the twelve. (Mark 14:12-17) 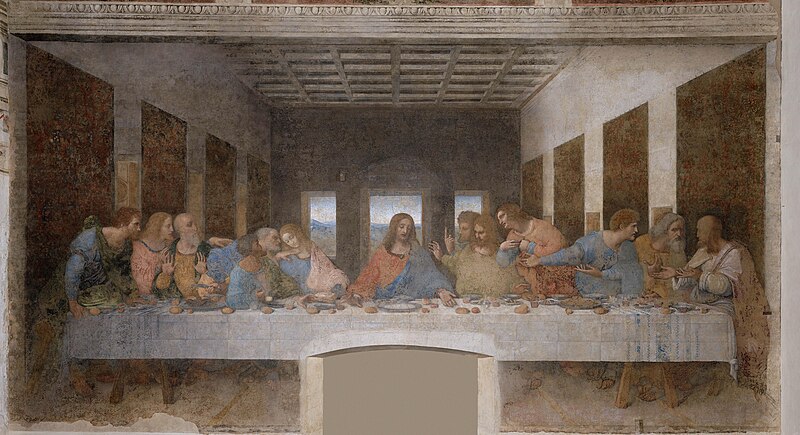 Can we know where this critically important meal took place? Mark’s account contains three interesting physical details. It mentions a “guestroom” (kataluma) and a “large upstairs room” (mega anagaion). It is also clear from verses 13 that this room is located “in the city,” meaning within the walls of Jerusalem.

The Last Supper is normally understood to have been a Passover festival meal, during which the Paschal sacrifice was eaten. Unlike other sacrifices that had to be eaten inside the Temple precincts, the thousands of Paschal lambs were taken home to be eaten around each family’s table.

Like all the Jewish pilgrims in town, Jesus needed to find a location to eat his Paschal meal. However, Bethany, the village two miles east of the city where he was staying that week, was simply too far from Jerusalem. The Paschal sacrifice could not be carried that far, as mandated by rabbinic law. The Mishnah (Pesachim 7:9) states the following:

A slaughtered paschal sacrifice which has been taken out [of the walls of Jerusalem] or which has become impure must be burned immediately [on the 14th of Nisan].

So Jesus needed to find a site closer to Temple, within the city walls. The solution was to rent out the upstairs guestroom of a house within the city. Recall from a previous blogpost that the word for this type of room, kataluma, is precisely the same word that is used in the nativity of Jesus:

“[Mary] gave birth to her firstborn son and wrapped him in bands of cloth, and laid him in a manger, because there was no place for them in the guestroom” (Luke 2:7).

Although the Gospels do not specify where in the city this upper room was located, the traditional location for the last 1600 years has been here, on a hill known as Mount Zion, which is simply the nickname given to the southern portion of Jeruasalem’s Western Hill. Today this is outside the city walls, but during the period of Jesus it was inside. 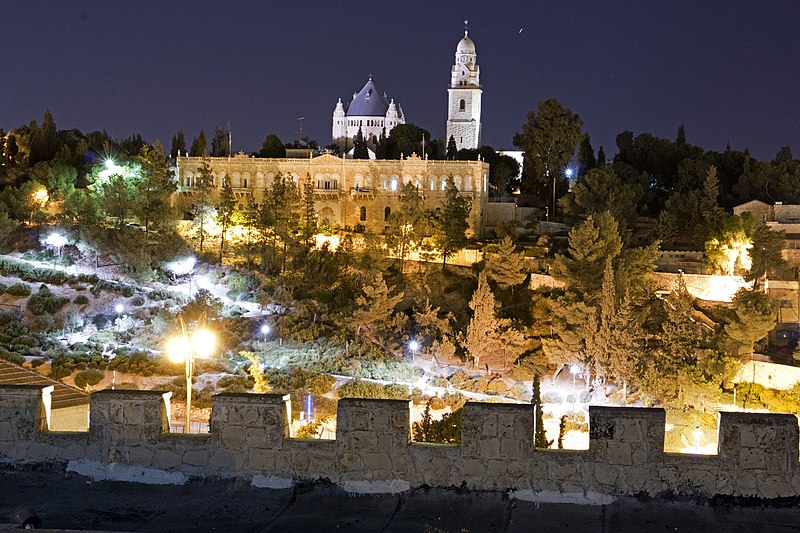 The night photo above was taken from Mishkenot Shananim, the first Jerusalem neighborhood built outside the Old City in the mid-19th century. It is located west of Mount Zion. In the foreground is the Ben Hinnom Valley. The large church at the top of the photo is the Dormition Abbey, the site of Miriam’s eternal rest according to Roman Catholics. Here is a closer look of this church.

Right beside this church is this building, known as the Cenacle (from the Latin cenaculum, meaning “dining room”), the traditional location of the Last Supper on Mount Zion.

This is what the Cenacle looks like on the inside. Clearly, the room, with its Gothic rib vaults, was built long after the Herodian period, likely by the Crusaders. 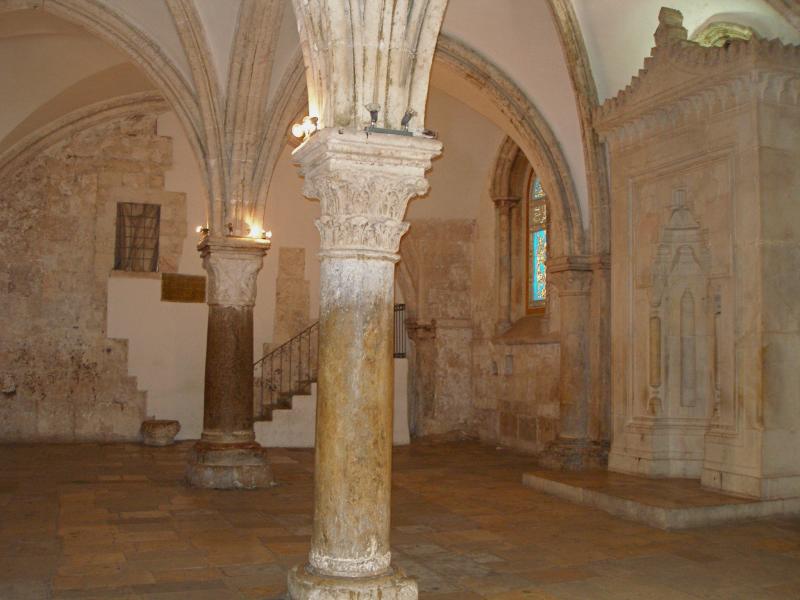 This is certainly not the way the room looked at the time of Jesus. It also contains a mihrab, a Muslim prayer niche, that dates to the 16th century. In addition to being the site of the Last Supper, this “upper room” is also thought to be the site of the descent of the Spirit on Pentecost (Acts 2). Interestingly, the room is located directly above the traditional (but very probably unhistorical) tomb of King David.

So where does that leave us? Archaeologists tend to be skeptical about the prospects of finding the real Last Supper guestroom. If this was a room rented out for one evening, it would not contain any lasting physical evidence of Jesus’ presence. But excavations of the Jewish Quarter in the 1970s have revealed some interesting possibilities. Perhaps the room where Jesus ate the Last Supper looked a bit more like this, a first century house found under the buildings of the modern Jewish Quarter.

Notice the amphorae for holding wine and the non-figurative mosaics on the floor. 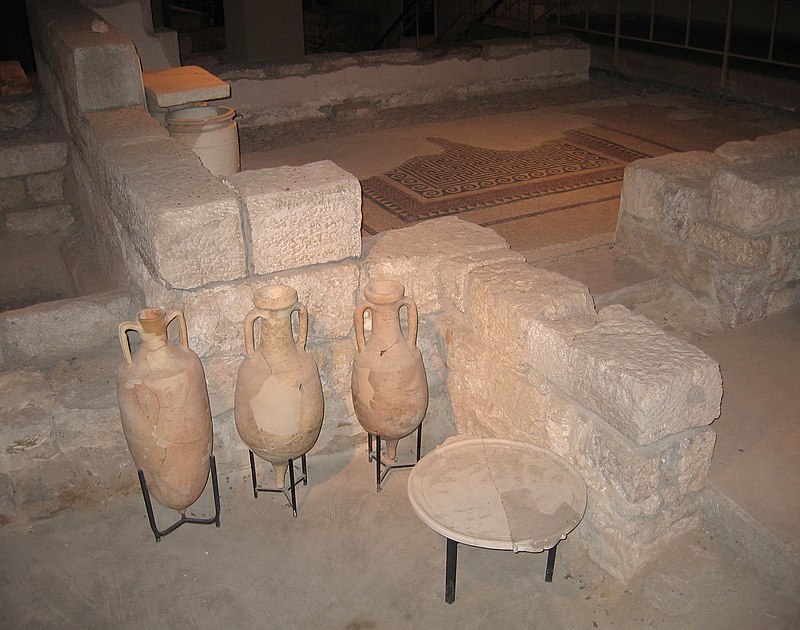 These rooms were part of lavish first-century Jewish homes that likely belonged to members of the priestly class. Was Jesus here? There is no way to verify this, unfortunately. But quite likely the room where he ate the Last Supper must have looked a lot like this. Quite different from the way that Leonardo da Vinci envisioned it in the famous painting above!