By Jonathan LipnickOctober 13, 2016No comments

Of all the nations that have a bad rap in Western civilization, perhaps none has a more unfavorable reputation than the Philistines. In modern English, we use the term “Philistine” to refer to a crude or uncivilized person, who is “guided by materialism and is usually disdainful of intellectual or artistic value” (Merriam-Webster). The origin of this reputation is found in the Hebrew Bible, where the Philistines are the “bad guys”, the arch-rivals of the Children of Israel. For centuries, the two nations stood in a state of quiet antagonism punctuated by intermittent warfare, such as the famous Battle of David and Goliath. 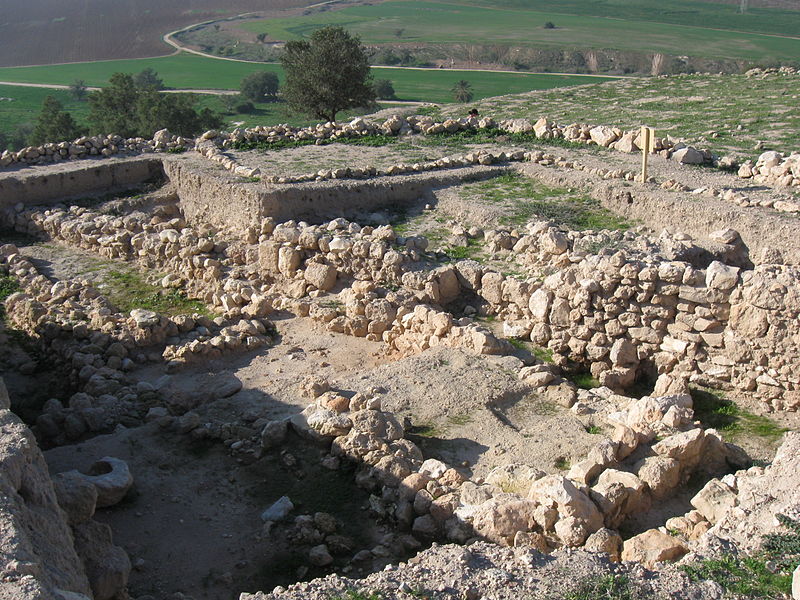 Tel es-Safi, which has been identified as Gath, one of the five urban centers of Philistine power, along with Ashdod, Ashkelon, Ekron and Gaza (1 Sam. 6:17) and the hometown of Goliath (1 Sam. 17:4).

This state of conflict was certainly the case under David, but it was even more pronounced in earlier generations, before the establishment of the united kingdom in Jerusalem around 1000 BCE. In this post, I would like to take a closer look at the Period of the Judges, when the Israelites were led by charismatic warriors. One of the most peculiar judges is Samson, who was more of a popular folk hero than an effective military leader. In this edition of Let’s Take Five will examine five places mentioned in the biblical story of Samson.

A compilation of the glass and faience inlays depicting the traditional enemies of Ancient Egypt, found at/by the royal palace adjacent to the temple of Medinet Habu, from the reign of Ramesses III (1182-1151 B.C.) Representations are (in order) a pair of Nubians, a Philistine, an Amorite, a Syrian and a Hittite. On display at the Museum of Fine Arts, Boston.

First a few words about the heathen nation that Samson spent his entire life flirting with: the Philistines. Known to the Egyptians as the PRSTW they were one of several ancient seafaring nations known as the “Sea Peoples” who originated in the area of the Aegean Sea (between modern Greece and Turkey). For complex geopolitical reasons, they left their Aegean homeland in approximately 1300 BCE and sailed southeast, coming into conflict with the Egyptians. Defeated, they headed north to the humble Land of Canaan. They entered Canaan in the 12th century BCE, around the same time that another foreign nation – the Israelites – was also entering the land.

This map shows the region controlled by the Israelites in the center pink. The Philistines control the area on the lower left in light green. Between them is the Shephelah in yellow. The birthplace of Samson between Zorah and Eshtaol is found just to the right of the word “Timnath”.

But whereas the Israelites led by Joshua conquered the mighty cities of Canaan from east to west, the Philistines entered the land in the opposite direction, from the Mediterranean Sea eastwards. Inevitably these two conquering peoples would come to clash. This is precisely the political situation that serves as the backdrop for the biblical books of Judges and Samuel. The Israelites dominated the Central Hill Country settling cities such as Hebron, Shechem and Gibeon. The Philistines dominated the Mediterranean Coastal Plain setting in Gaza, Ashdod and Ashkelon. Between them lay the narrow buffer zone of the Shephelah (“lowland”) foothills.

A view of the fertile rolling hills of the Shephelah, which functioned as a border zone between the Philistines and the Israelites for hundreds of years in the biblical period. The considerably higher Central Hill Country dominated by the Israelites is visible in the distance.

This is precisely the reason why the cities of the Shephelah such as Bet Shemesh, Azekah and Socoh feature so prominently in this part of the Hebrew Bible. This is certainly the case when we read the four chapters dedicated to the story of Samson (Judges 13-16). Samson is a tragic figure. He was endowed with superhuman strength but instead of defeating the Philistines, he wasted his gifts on courting women. Let’s have a look at some of the places where Samson spent his time.

(1) The first site we will look at is the village of Zorah, the hometown of Samson’s father Manoah (Judges 13:2). Zorah is located a few miles north of Beth Shemesh, in the territory assigned to the tribe of Dan (Joshua 19:41). But in effect, it was taken over by Judah according to Joshua 15:33. In the photograph below you can see what the area looks like on a typical spring day. Note that the grove pine trees in the background is non-indigenous to the Land of Israel. The small trees and shrubs in the foreground are much more typical of what the region looked like in the time of the Bible.

(2) The second site we will look at is Eshtaol which is mentioned in the story of the birth of Samson:

The woman bore a son, and named him Samson. The boy grew, and the Lord blessed him. 25 The spirit of the Lord began to stir him in Mahaneh-dan, between Zorah and Eshtaol. (Judges 13:24-25).

The modern village of Eshtaol is located on the site of the biblical village of the same name.

(3) The villages of Zorah and Eshtaol are both strategic guard posts, located at the foot of the hill country, alongside the Sorek Valley which leads from the Central Hills north of Jerusalem westward to the Mediterranean Sea. This would have been one of the crucial places where the Israelites would have defended access to their territory. The fact that Samson is born here indicates that he is a frontiersman, a border dweller, absorbing influences from both the Israelites and the Philistines. 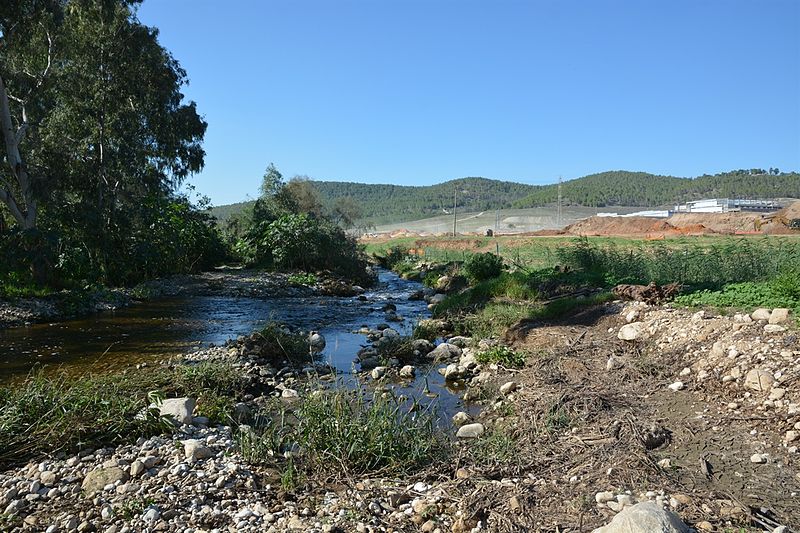 This is what the Sorek Valley looks like in the immediate vicinity of Zorah and Eshtaol. It is no longer a deep canyon, as it appears in the following image taken in the Central Hills. 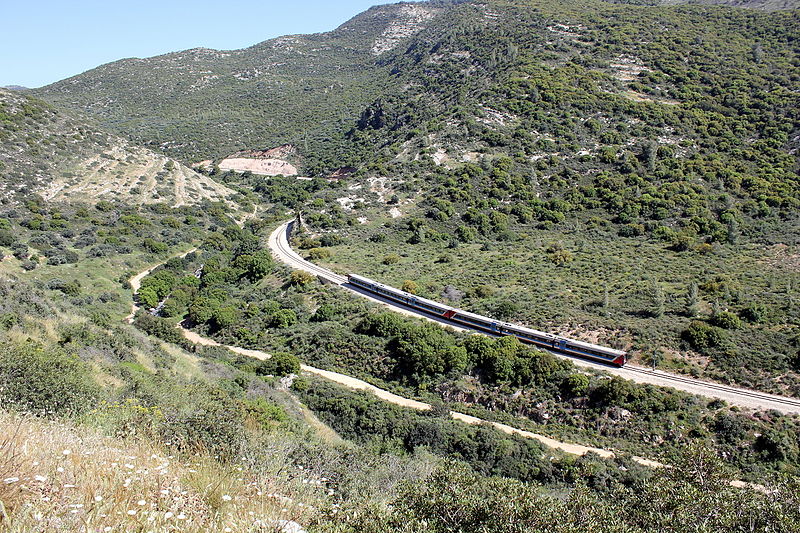 The Sorek Valley is one of the most impressive wadis that evacuates rainwater from the Judean Central Hills westward back to the Mediterranean Sea. Most of the year it is dry and can be used for transportation. Samson was born alongside this valley and followed it east to Philistia, where he met the women who were the cause of his eventual downfall. Since the late 19th century this valley has been the route used by the railway linking Jerusalem with Tel Aviv (Jaffa), as seen in the image above. 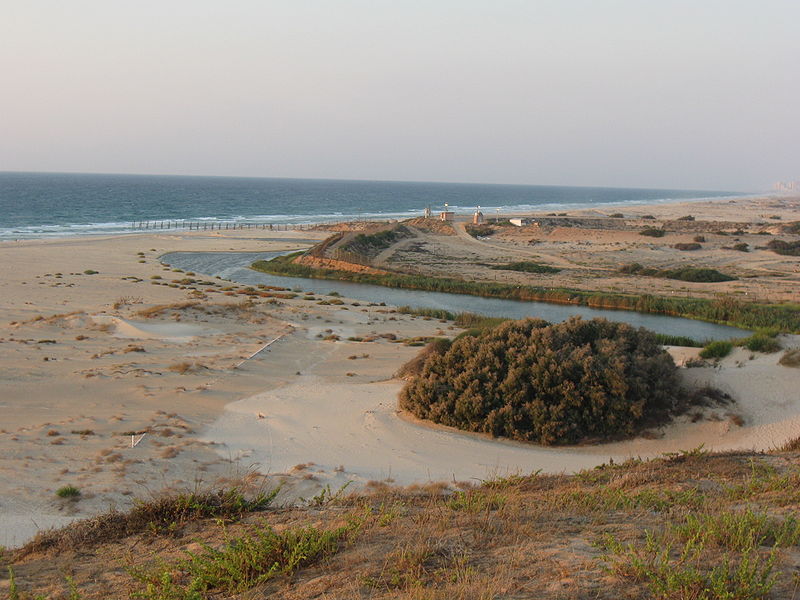 The mouth of the Sorek River, where it empties out into the Mediterranean Sea at Palmakhim Beach

(4) As we know from the continuation of the story, Samson was no stranger to the Philistines, and would frequently go down to their territory in search of women. The fourth site we will look at is Timnah, which was initially assigned to Dan (Joshua 19:43), but was taken by the Philistines. Also located alongside the Sorek Valley, this is just a few miles west of Zorah at a site known as Tel-el-Batashi. Famously, it is where Samson fell in love with a Philistine woman, to the great displeasure of his parents. This should not be confused with another site with the same name, located in the southern Arava region, where copper has been mined for thousands of years.

(5) Although he likely stayed close to his home base in the Shephelah, in some cases Samson went all the way to the coastal city of Gaza (Judges 16:1). It was during one such journey that Samson came across one of the most notorious temptresses in the Bible, Delilah. Gaza was one of the five cities that made up the Philistine Pentapolis and was located along the coastal highway linking Egypt with Mesopotamia. It was in Gaza in the Temple of Dagon that Samson met his tragic death. The site of ancient Gaza has been identified as Tell Harube, the highest point in modern Gaza City, not far from the main mosque pictured below. Unfortunately, I do not have any photographs of this archaeological site at my disposal. An interesting fact is that the name Gaza is the origin of the word “gauze”.

This is because the Philistines, who dominated Gaza, were famous for producing a very fine fabric that was semi-transparent that resembles the bandages later used to dress wounds. Perhaps this what is Samson is referring to when he says “I will give you thirty linen tunics (סדינים) and thirty festal garments (חליפות בגדים)” (Judges 14:13). 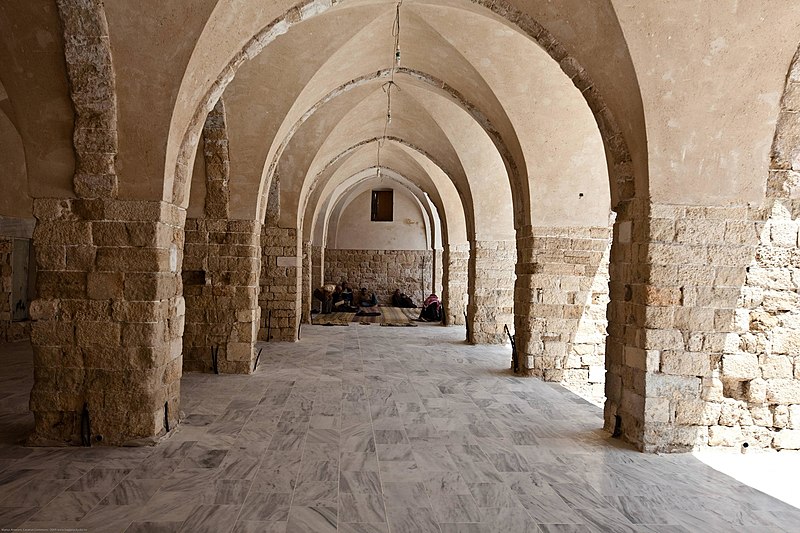 After his dramatic death, Samson was brought back home to be buried alongside his father “between Zorah and Eshtaol” (Judges 16:31). Due to Samson’s weak character, his tribe of Dan was unable to defeat the neighboring Philistines. Instead of remaining in the territory granted to them by Joshua, they moved far north to the Upper Galilee (Judges 18:27). Pictured here are the impressively well preserved remains of the Canaanite city gate at Tel Dan, which the tribe of Dan encountered. The city was known as Laish prior to the arrival of the Danites. Built from mud-bricks in 1800 BCE, this might very well be the earliest example of an arch anywhere in the world.