Why Was Eve Created From Adam’s Rib?

By Jonathan LipnickNovember 15, 2016No comments

The opening chapters of the biblical book of Genesis are among the most closely read words in the history of Western civilization. The story of the creation of the world has been endlessly quoted, analyzed and commented upon. Yet, one question that does not get enough attention is: why did God create Eve from the rib of Adam? I would like to devote this blog post to examining this question. I am not really seeking to answer the larger philosophical question of gender, namely, why according to the Bible are women secondary to men? Rather, I want to ask why specifically from the rib? What is it about this bone that makes it an appropriate source for Eve? 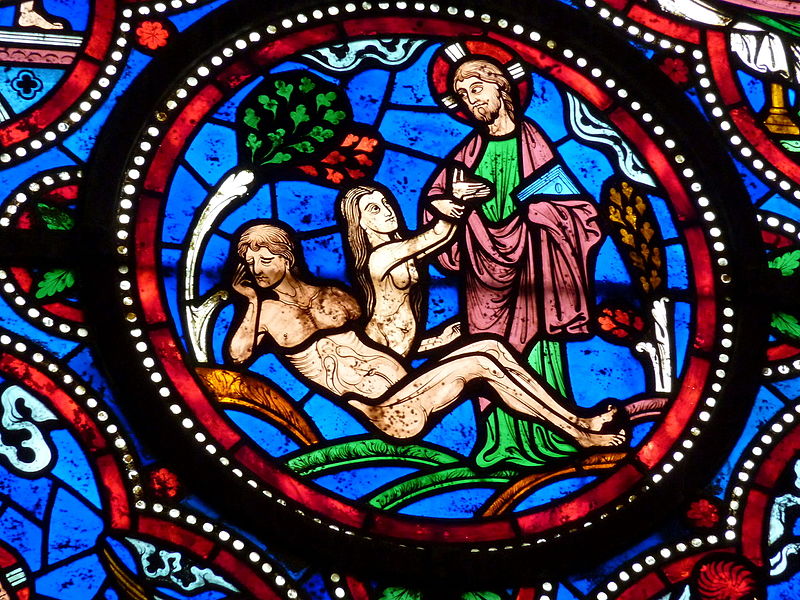 Stained glass window depicting the creation of Eve from the rib of Adam in the Chapelle de la Vierge of Cathédrale Saint-Julien, Le Mans, France

Anyone who has read the biblical account of creation has probably noticed that the story is told twice, with significant differences. In chapter 1 of Genesis, we read that initially, the plan was to create human beings – men and women together – as a direct imitation of God:

The key word that is repeated three times in this passage is “image”, in the original Hebrew the word is צלם (tzelem). Unfortunately, this plan did not work out. The notion of making human beings mini-gods was destined to fail because it did not allow for enough of a barrier between the divine and human spheres.

Michelangelo’s depiction of the Creation of Adam from the Sistine Chapel ceiling certainly emphasizes the “image” of Genesis chapter 1, the close similarity between God and humanity.

And so the second time that we read through the creation story in chapter 2, we do not find the word “image” (tzelem) at all. Even more impressive is the fact that in the entire rest of the Hebrew Bible, the word tzelem always has the negative connotation of a pagan idol. For example:

In the plains of Moab by the Jordan at Jericho, the Lord spoke to Moses, saying: Speak to the Israelites, and say to them: When you cross over the Jordan into the land of Canaan, you shall drive out all the inhabitants of the land from before you, destroy all their figured stones, destroy all their cast images, and demolish all their high places. (Numbers 33:50-52)

God commands the Israelites to destroy three symbols of Canaanite religion: stone pillars that functioned as idols, metal statuettes of gods, and elevated altars that served as temples. The second of these, the “cast images” (tzalmei masekhotam) uses the same word tzelem seen above. This is probably referring to the popular metal statues of the Canaanite god Baal Hadad which the Israelites would have encountered upon entering the Land. Examples of such “images” of Baal holding a thunderbolt in metal and stone from the 15th-13th century BCE can be found at the Louvre Museum: 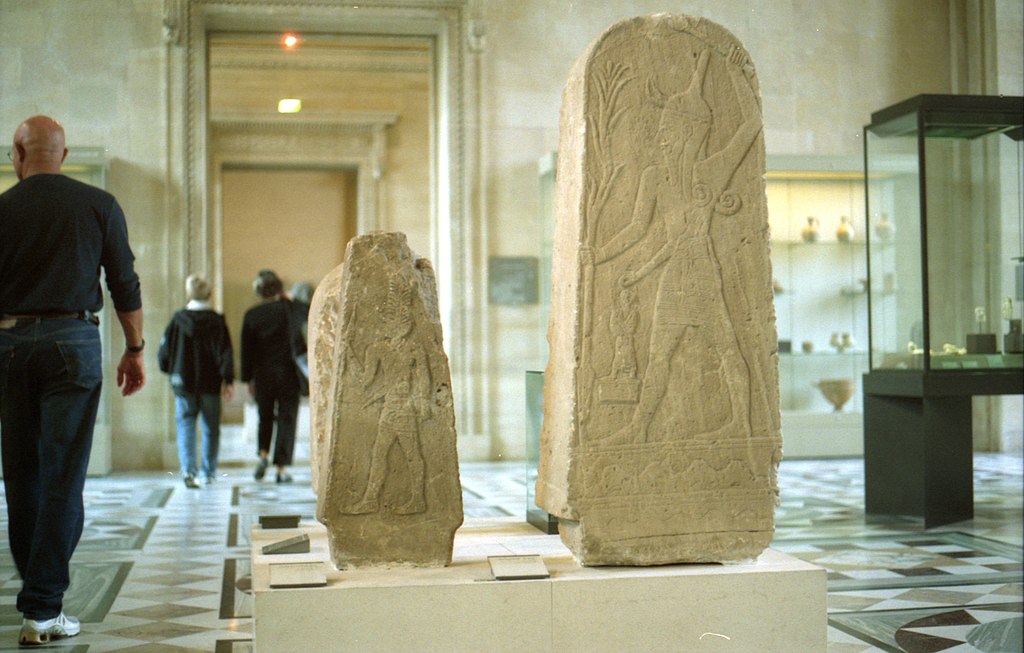 Similarly, the prophet Ezekiel discusses the destruction of Jerusalem and the Temple as follows:

Their silver and gold cannot save them on the day of the wrath of the Lord. They shall not satisfy their hunger or fill their stomachs with it. For it was the stumbling block of their iniquity. From their beautiful ornament, in which they took pride, they made their abominable images, their detestable things; therefore I will make of it an unclean thing to them. (Ezekiel 7:19-20)

Here the same Hebrew word (tzelem) is used to refer to sinful pagan images that violate God’s covenant. These two verses are just a brief sample of the dozens of places in the Bible where the word tzelem has the negative connotation of idol. So it should come as no surprise that in the second telling of the creation story in Genesis chapter 2, we do not find the word tzelem. The second time around, God revises his plan for creation but not entirely. Instead of creating “humankind in his tzelem”, he takes Eve out of Adam’s rib:

Then the Lord God said, “It is not good that the man should be alone; I will make him a helper as his partner.”… So the Lord God caused a deep sleep to fall upon the man, and he slept; then he took one of his ribs and closed up its place with flesh. And the rib that the Lord God had taken from the man he made into a woman and brought her to the man. Then the man said, “This at last is bone of my bones and flesh of my flesh; this one shall be called Woman, for out of Man this one was taken.” (Genesis 2:18,21-23)

The Hebrew word for “rib” used twice in this passage is צלע (tzelah). This is a delicate tweak, just one letter removed from the word tzelem. The visual and auditory similarity between these two words is quite remarkable.

An etching of God operating on Adam to remove his rib. By G.B. Leonetti after C. Cencioni after Nicola Pisano.

But the meanings of these two words could not be more different. The “image” is something divine, ethereal, and intangible. The “rib”, by contrast, is something utterly corporeal, lowly, and inconsequential. We have seen how the word “image” (tzelem) fell into disfavor after the opening chapter of Genesis. But the exact opposite thing happened to the word “rib” (tzelah). The Hebrew word for “rib” (tzelah) will go on to have a hugely important career in the remainder of the Bible, although its meaning is not always restricted to the rib per se. It can refer to a wide variety of things that concern the “side” of the body or an object. 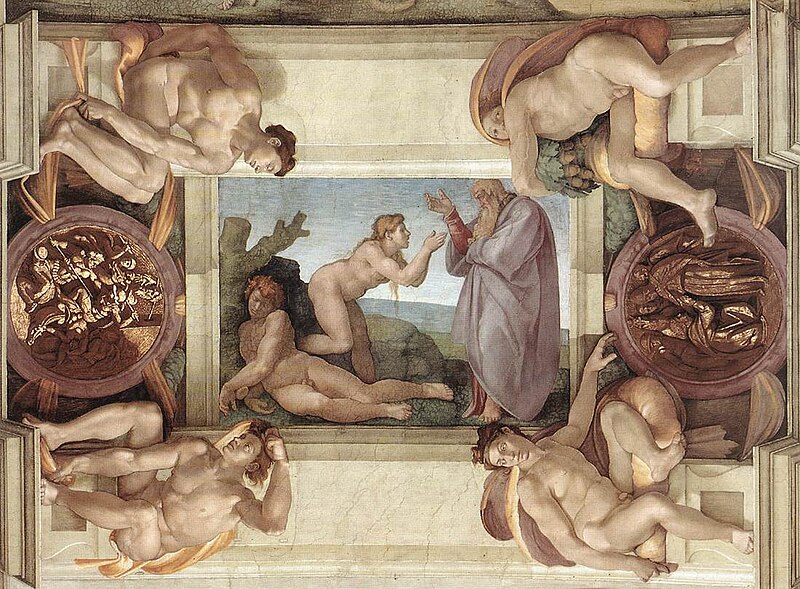 In the book of Exodus 26 the highly detailed description of the Tabernacle refers to the “sides” of the sacred structure using the word tzelah:

The building of the Tabernacle in the wilderness. A print from the Phillip Medhurst Collection of Bible illustrations in the possession of Revd. Philip De Vere at St. George’s Court, Kidderminster, England.

In Genesis 32 after Jacob spends all night wrestling with an angel, we read that “the sun rose upon him as he passed Penuel, limping because of his hip” (Genesis 32:32). The verb “to limp” (צלע) is taken from the same three letters as “rib” (צלע) because it involves walking on the side, just as the ribs encase the abdomen from the sides. This is an incredibly important scene because it is here that Jacob receives the name Israel which will become the name of the nation descended from him. It is quite astounding that at this crucial moment in the life of the patriarch, the Bible emphasizes his corporeality and brokenness by using the word tzelah. 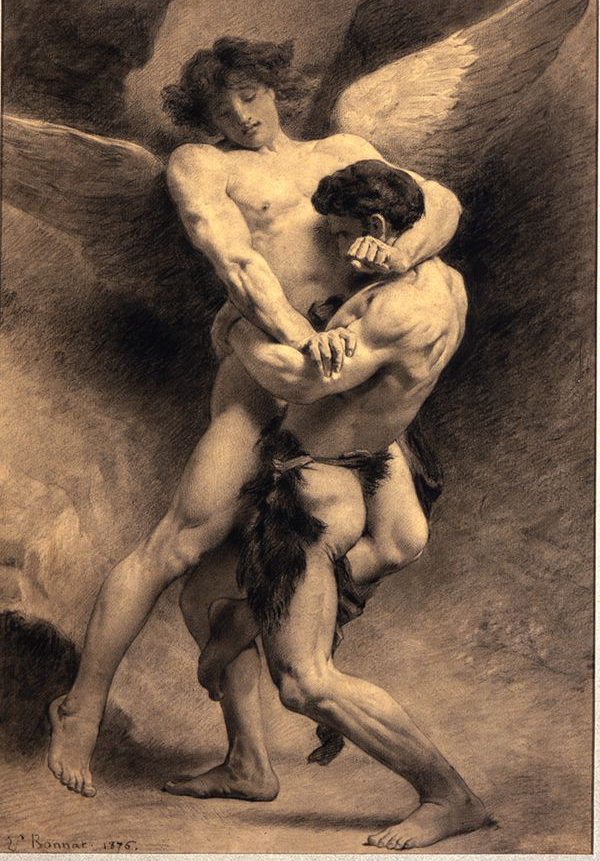 Jacob wrestling with the angel of God, by Léon Joseph Florentin Bonnat, 1876

Finally, the prophet Micah refers to messianic era as a time when even the weakest members of society are saved:

On that day, says the Lord, I will assemble the lame and gather those who have been driven away, and those whom I have afflicted. The lame I will make the remnant, and those who were cast off, a strong nation; and the Lord will reign over them in Mount Zion now and forevermore. (Micah 4:6-7)

The word for “lame” is the same root (צלע) seen in all these examples. These are three examples that demonstrate the extent to which the core of humanity’s identity according to the Bible is inherently flawed. We are not perfect demigods for whom “image” is the core value. Rather, we are flawed, lame, limping creatures; and despite this God promises that we are deserving of salvation. The book of Psalms captures this paradox well:

But it is for you, O Lord, that I wait; it is you, O Lord my God, who will answer. For I pray, “Only do not let them rejoice over me, those who boast against me when my foot slips.” For I am ready to fall (צֶלַע), and my pain is ever with me.