67 So Jesus said to the Twelve, “Do you want to go away as well?” 68 Simon Peter answered him, “Lord, to whom shall we go? You have the words of eternal life, 69 and we have believed, and have come to know, that you are the Holy One of God.” 70 Jesus answered them, “Did I not choose you, the Twelve? And yet one of you is a devil.” 71 He spoke of Judas the son of Simon Iscariot, for he, one of the Twelve, was going to betray him. 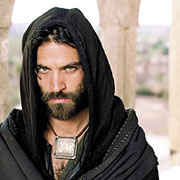 Throughout Christian history, the Jewish people as a whole were often charged by the so-called Christian majority with the charge of deicide (the killing of God). One of the side issues in this type of accusation against the Jews is the Christian connection of the Jews with the person of Judas Iscariot. Although Jesus had two disciples called Judas, the fact that the name of the one who betrayed him was connected with Jews and Judaism, added oil to the fire of anti-Jewish sentiment. You can probably see why. Judah/Judas, Judea and Jews are etymologically connected. Even such giants of Christian thought, like St. Augustine, understood Judas Iscariot to be the symbol of all Jews. Consequently, John’s Gospel was also reinterpreted to be an anti-Jewish document instead of an inner Jewish one (Read “He came unto His own”). The character of Judas Iscariot was also misread in an effort to fit the textual facts into this anti-Jewish theory. So much so that in most languages that were influenced by Christianity, the word Judas became synonymous with the word “traitor.”

Unlike the Gospel of Judas (a later work written in the name of Judas) which portrayed Judas as the truest disciple of Jesus and a hero, I see him in an opposite role. I suggest that Judah/Judas was not guilty of the sin he was charged with (betrayal for money), but he was indeed guilty of something far worse. Please, let me suggest an alternative to the traditional theory.

I think that there is a good argument to be made for Judas Iscariot being a former sucarii; the dagger-related movement that was known for killing Jews who endorsed Roman occupation with the help of a dagger in the populated city squares. In other words it is possible that Judas in his pre-Jesus days was a member (as were at some point several other members of Jesus’ intimate circle of disciples) of an ultra-zealot movement that was not unlike the modern Al-Qaida. The name Iscariot is of unclear origins and may mean several things including being connected to the sucarii .

When Judas consistently saw Jesus making what he felt to be all the wrong steps to bring about a Jewish revolution against Romans and their Temple poppets, he grew restless. He continued to believe that Jesus was indeed the Messiah who would free Israel from oppression (he witnessed majority of his miracles!), but disagreed with him as to how he was going about it. Remember he betrayed Jesus at the time of Passover celebrations. Make no mistake about it, Passover was the traditional time for starting Jewish revolts. Everyone, including Judas, knew that. He also began to implement his plan only after he saw Jesus being anointed by a prostitute. What pushed him over the edge was Jesus’ insistence that this story would  be told for many ages to come and to all nations. This hardly fit the vision that Judas had for Jesus’ mission.

The word to betray does not indicate the usual charge of selling for 30 coins of silver. The Greek word simply means to hand over. The risk of being considered the betrayer of Jesus in Galilee was disproportionately high (given Jesus popularity there) compared to the payment Judas would have received from the Temple in Judea. My point is that he did not do what he did for money. What Judas tried to do, being fully convinced of Jesus’ divine powers, is this: he thought that when the arrest would be attempted, the long-awaited revolt would finally begin. Jesus would have to show his power. God would finally intervene and Jewish land would be liberated. It was a deeply religious desire that drove Judas to his actions.

If I am right in my reconstruction, the sin of Judas was not the “selling of Jesus” to the Temple authorities (betrayal for goods like money), but the much greater sin of seeking to force Jesus’ hand so he would obey the will of Judah. Therefore, Jews should not be associated with Judas as they often are in a Christian anti-Jewish view. Judas’ plan failed miserably. Jesus did not resist arrest (though his former zealot disciples attempted to do so). He was crucified instead. Judas was overcome with despair when he saw his leader crucified. For Judas, committing suicide was therefore a fully logical response to the events he set in action.

When people stand against God’s will, resisting it and forcing God’s hand, they commit the terrible sin of Judas. It is the absolute opposite of how Jesus taught Judas to pray: “Your will be done… on earth as it is in haven.” May none of us become guilty in the same way as Judas. May His will be done.

IF YOU HAVE NOT YET DOWNLOADED “Psalms: A Hebraic Small Group Bible Study Guide”. Make sure to do now. Click to download HERE!