Although it is not as familiar as the names of other famous biblical places, Tel Arad is certainly one of the most important archaeological sites in Israel. But it is unfortunately not visited nearly as frequently as it should be. What makes it so important? In this post I would like to offer two answers. 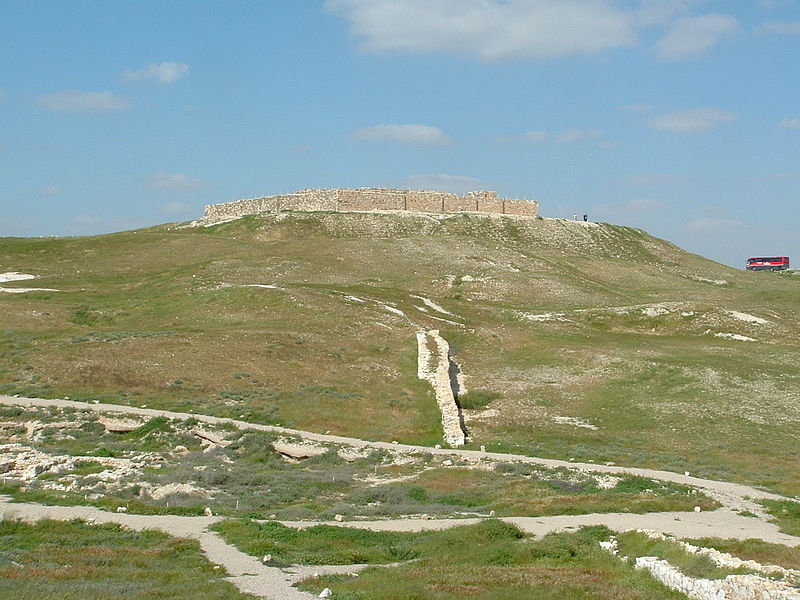 The Israelite fortress at the summit of Tel Arad which dates to the 10th-7th centuries BCE. Notice that the desert is covered in lush greenery during the brief winter season.

First things first. The name Arad (ערד) is pronounced “ah-Rod” with the stress on the second syllable. Leaving aside the initial unstressed “A”, the word more or less rhymes with “cod”, not “lad”.

Arad is located west of the Dead Sea in the northern Negev.

Ancient Arad is located in the northern Negev, not far from the modern city by the same name. Arad was an important frontier city in the days of the Bible. It lay on the southern border of the ancient Land of Israel, about 25 kilometers west of the Dead Sea and about 25 kilometers south of Hebron. It is on the same latitude as another important biblical city: Beer Sheva. These two cities lie along an invisible line below which less than 200 millimeters of precipitation per year. Basically this as far south in Israel one can reliably conduct agriculture. Below this line, there simply is not enough rain to sustain life. Much of the year, the landscape is very dry; but during the winter months the covering of vegetation can be quite abundant.

Tel Arad in the wet season 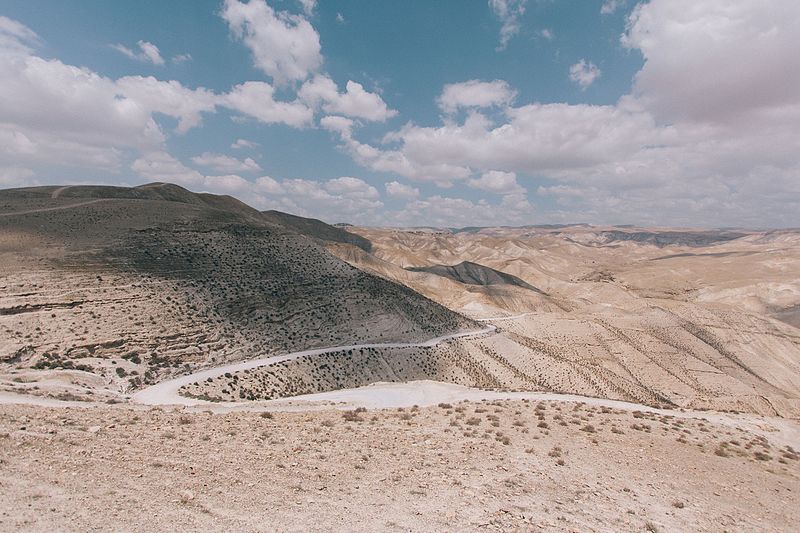 Although the wilderness around Arad looks totally barren, there is actually enough rainfall here to sustain life.

Arad is mentioned in the context of the Israelites attempt to conquer the Land of Canaan from the southern oasis of Kadesh Barnea:

When the Canaanite king of Arad, who lived in the Negev, heard that Israel was coming along the road to Atharim, he attacked the Israelites and captured some of them. Then Israel made this vow to the Lord: “If you will deliver these people into our hands, we will totally destroy their cities.” The Lord listened to Israel’s plea and gave the Canaanites over to them. They completely destroyed them and their towns; so the place was named Hormah. (Numbers 21:1-3)

This passage is somewhat confusing. Did the Israelites conquer Arad or not? According to this passage, the city of Arad was too strong for the Israelites. However, they subsequently made a vow and then successfully conquered another city which was renamed Hormah. The name Hormah (חרמה) comes from from the Hebrew root HRM (חרם), meaning “to totally destroy,” the same word used in the vow. So what city did they conquer after failing to take Arad? The answer is Zephath, which is conquered and destroyed by the tribes of Judah and Simeon in Judges 1:17. Total destruction (in Hebrew Herem) is not just wanton destruction; it is sacred destruction mandated by God, as seen in this passage:

However, in the cities of the nations the Lord your God is giving you as an inheritance, do not leave alive anything that breathes.Completely destroy them—the Hittites, Amorites, Canaanites, Perizzites, Hivites and Jebusites—as the Lord your God has commanded you. Otherwise, they will teach you to follow all the detestable things they do in worshiping their gods, and you will sin against the Lord your God. (Deuteronomy 20:16-18)

Arad is an amazing place to witness the world of the Bible coming alive. For readers of the Bible who are curious how archaeology can clarify the words of Scripture, this site offers unparalleled riches. Prior to the Israelites, the original inhabitants of Arad were Canaanites. What remains from this most ancient period are some typical Canaanite dwellings that have been reconstructed. These houses date to the Early Bronze Age (3500-2300 BCE). It is very rare to find such extensive remains from this ancient period in archaeological sites in Israel. Normally, the Early Bronze remains are buried deep beneath subsequent layers, and thus often impossible to access. However in the lower portion of Tel Arad, the Early Bronze is entirely visible. This type of house is called a “broad house” (or “Arad-type house” because it is so well attested at this site). It is a simple one room house that contains benches lining the interior walls, a pillar base in middle to support the roof, and the door opening on the wide side of house. So the first reason that Tel Arad is so special is that it offers a rare glimpse into what urban life in the days of the Canaanites looked like.

The exterior of a Canaanite dwelling from the Early Bronze Age

The interior of a Canaanite dwelling from the Early Bronze Age

However there is more! The truly famous find at Arad is within the much later Israelite fortress at the top of the hill. Here archaeologist Yohanan Aharoni digging in the 1960s found the remains of a small temple containing a sacrificial altar and a “Holy of Holies” (Hebrew: devir), the inner sanctum of the temple thought to be the dwelling place of God. This shrine is the only example of an authentic Beit Yahweh (“House of the Lord”) that has ever been found by archaeologists.

The “Holy of Holies” was the innermost room of the Israelite temple at Arad. In contains two incense altars, both of which are reproductions, the originals having been placed in the Israel Museum. In the back of the room is a standing stone known in Hebrew as a “mazevah” (מצבה) upon a raised platform called a “bamah” (במה). In fact there are two standing stones, but the second is out of view behind the first. See the image below for a better view. 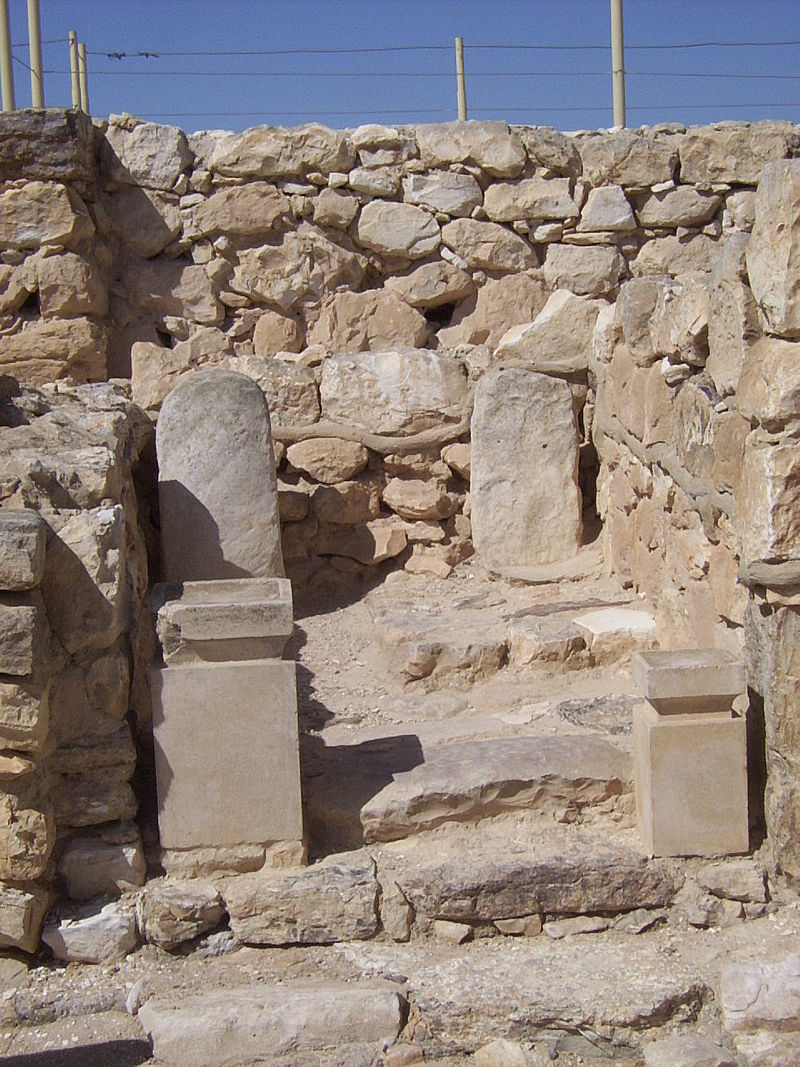 An older view of the excavated Holy of Holies, which originally contained two standing stones. Some scholars have speculated that these two stones represent the chief God (Yahweh) and his female consort (Asherah). This belief was eventually eliminated from the religion of the Israelites.

Outside the Holy of Holies is this large sacrificial altar. The dimensions are precisely in accordance with what is specified in Exodus 27:1 as well as being made from “unhewn field stones” (Exodus 20:22).

The second reason that Arad is truly unique among biblical archaeological sites is that it is the best example of an Iron Age temple ever found. Because excavation of Jerusalem’s Temple Mount is impossible, the shrine at Arad is the closest physical example that we have to the Temple of Solomon, which is described in great detail in 1 Kings 6. Presumably, the portable Tabernacle detailed in Exodus 26 looked something like this as well. This is precisely the type of shrine which the Bible denounces in Deuteronomy ch. 12 in an effort to centralize worship of God in a single location: the Temple Mount in Jerusalem.

Destroy completely all the places on the high mountains, on the hills and under every spreading tree, where the nations you are dispossessing worship their gods. Break down their altars, smash their sacred stones and burn their Asherah poles in the fire; cut down the idols of their gods and wipe out their names from those places. (Deut. 12:2)

Most likely, it was under the reforms of King Hezekiah in the 8th century BCE that Arad’s temple was finally put out of commission. According to 2 Kings 18, Hezekiah was a rare example of a truly righteous king, so much so that he is compared to King David. The reason? He followed the law in the Book of Deuteronomy (quoted above) and “removed the high places, smashed the sacred stones and cut down the Asherah poles” (2 Kings 18:4). Interestingly, Arad’s sacred stones were not smashed. Perhaps this is because Arad is quite a distance from Jerusalem. Presumably dozens of other more centrally located cultic sites were totally destroyed by Hezekiah and thus they are not found by modern archaeologists. Arad had the good fortune of being a frontier town which escaped the notice of the king’s officers.

A view of the Israelite citadel (which contains the temple), as seen from the lower Canaanite city.