Through The Looking Glass

By Jonathan LipnickDecember 31, 2016No comments

Many readers of the New Testament are familiar with Paul’s statement at the end of his first letter to Corinthians regarding the absolute clarity which the future holds for those willing to abide in the murkiness of faith in the here and now:

For now we see in a mirror dimly, but then face to face. Now I know in part; then I shall understand fully, even as I have been fully understood. (1 Corinthians 13:12)

What sort of mirror is Paul referring to? Likely he is talking about a small disk made of polished metal such as brass, silver, or gold. These mirrors were very beautiful luxury items used by the wealthy, but they did not provide a very sharp reflection when compared to modern glass mirrors. Here are two examples of ancient Roman mirrors found at the Museum het Valkhof, Nijmegen (Netherlands): 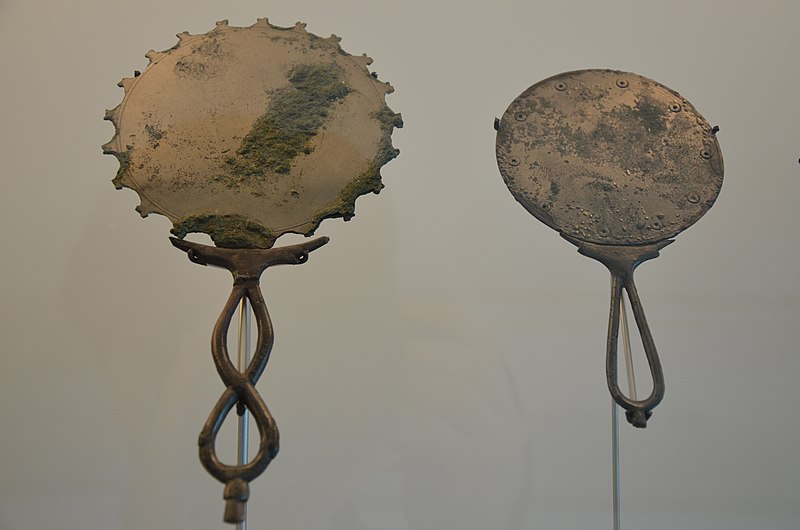 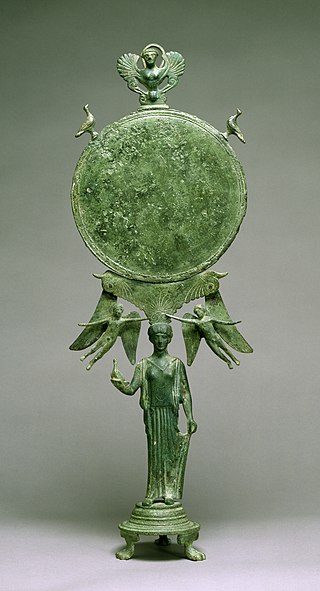 A graceful female figure serves as a “caryatid,” or human support, for a mirror. The figure’s pose, demure gestures, and simple drapery characterize the quiet elegance of the Early Classical style. The presence of the winged Eros figures (representing the god of love) above suggests that the maiden is a bride or perhaps Aphrodite herself. The siren at the top of the disk recalls the irresistible allure of these mythical bird-women.

And he made the laver of bronze and its base of bronze, from the mirrors (מַרְאֹת) of the ministering women who ministered at the door of the tent of meeting. (Exodus 38:8)

Although two different Hebrew words (mar’eh and re’i) are used in these verses, both use words that are based off the same root RAH (ראה), meaning “to see”. It would be appropriate to translate these words highly literally as “vision” or “spectacle”, just as the word “mirror” derives from the Latin verb mirare (“to look at”) 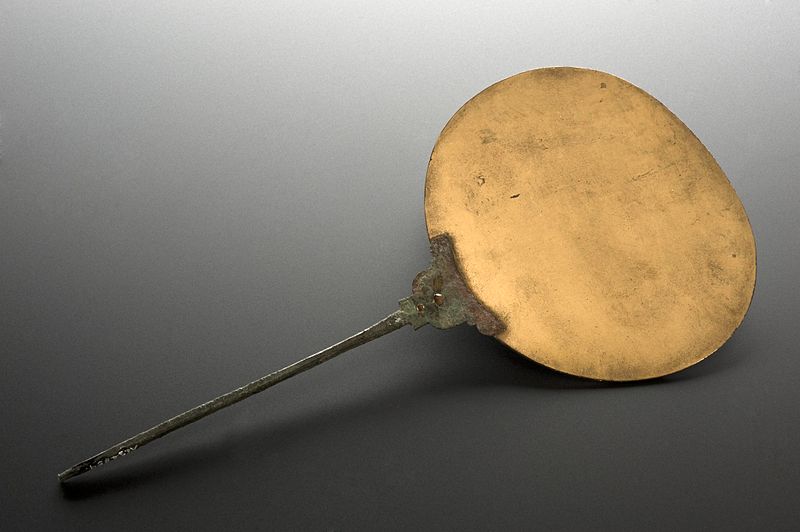 More details Facial appearance was important in Ancient Egypt. Cosmetics were common. They often had religious significance. The polished surface of this Egyptian toiletry mirror makes an effective mirror even after over 2000 years. Mirrors were introduced into the Greek and Roman empires from Egypt. The bronze mirror may have had a wooden or ivory handle.

So contrary to common belief, in antiquity mirrors were made of molten metal, not glass as they are today. But this does not mean that glass was unknown in the days of the Bible! In the spring of 2016 Israeli archaeologists digging near Mount Carmel uncovered remains of a 4th century glass factory, the earliest such example ever found in the Land of Israel. What do we know about the use of glass from the time of the Bible?

Roman glass from the Historisches Museum in Bern‎, Switzerland

Historians have long known that the Land of Israel was famous for its beautiful green glass, which was called vitri iudaici (“Judaean glass”) in Latin. However, this excavation is the earliest evidence that has been found for this valuable industry. Glass-making started thousands of years ago in Mesopotamia and eventually spread to the Land of Israel. At the time of the Bible, it was a very highly prized material. This is clear from the single reference found in the Bible to glass, found in Job 28:17 where “wisdom” is praised as so valuable that:

Gold and glass cannot equal it, nor can it be exchanged for jewels of fine gold.

The fact that glass is equated with gold indicates its preciousness to the ancient Israelites. For modern people glass is something we take for granted. But for ancient people glass was a source of wonder. It was as clear as water and yet as hard as rock. It resembled ice but could be heated. Its unique properties are what gave it its special name in Hebrew: zekhukhit (זכוכית). This comes from the root ZCC (זכך) meaning clean or pure, which is also the root of the name of Zacchaeus the tax-collector (Luke 19).