One of several ancient ritual baths (miqvaot) found at Qumran, on the northwestern shores of the Dead Sea, dating to the late Second Temple period.

In recent weeks, archaeologists have uncovered a large ritual bath in the southeastern Jerusalem neighborhood of Arnona (see below). The ancient bath was found underground in the course of the construction of a playground, not an uncommon occurrence in Israel. It is difficult to construct anything new (roads, houses, malls) without coming across something ancient (roads, houses, markets) the moment the ground in broken.

Hundreds of similar ritual baths have been uncovered in salvage excavations throughout the country. But the newly found miqveh is unique because its plastered walls still contain Aramaic writing and images (a boat, palm trees and fish) that date back 2000 years. A brief video can be seen here. Images can be seen here. Another ritual bath was found beneath a private house in the village of Ein Kerem near Jerusalem several months ago. Archaeologists have not yet deciphered the Aramaic inscriptions, but likely they are personal names. We will report back when more information emerges.

Pictures of the newly discovered Arnona miqveh, by Shai Halevy, courtesy of the Israel Antiquities Authority

Ancient ritual baths found in Israel all have a similar appearance: a flight of steps leads down into a small underground room the walls of which have been plastered to prevent water from seeping out. These types of bathing installations (known in Hebrew as a מקוה miqveh; plural מקואות miqvaot) date to the late Second Temple Period, that is, sometime between 200 BCE and  70 CE. The Hebrew word miqveh comes from a secondary sense of the three-letter root קוה (k-v-h), meaning “to gather together”, a ritual bath being a place where water has been purposely “collected together” by means of plastered walls and drainage ducts. This has nothing to do with the more common primary sense of the same root קוה (k-v-h), meaning “to hope”, as in the title of Israel’s national anthem HaTikvah, “the hope”.

The Hebrew word miqveh (in this specific sense of a ritual bath) does not explicitly appear in the Hebrew Bible, presumably because during the early Israelite period ritual immersion took place in natural bodies of water such as springs, lakes and the Mediterranean Sea. Only later did Jews build plastered pools for this purpose, to which the name miqveh was applied. Perhaps Jews devised this name from an interesting biblical example of the verb קוה (k-v-h) used with regard to water. It is found in the account of the third day of the creation of the world:

And God said, “Let the water under the sky be gathered (יִקָּווּ) to one place, and let dry ground appear.” And it was so. God called the dry ground “land,” and the gathered waters (מִקְוֵה הַמַּיִם) he called “seas.” And God saw that it was good. (Genesis 1:9-10)

Elsewhere in the Torah, we find the term miqveh mayim (literally, “water collection”) applied to cisterns (some English translations use the term “reservoir”) which were used to collect drinking water (Exodus 7:19; Leviticus 11:36).

Ancient miqvaot are a very common find throughout Israel, particularly in archaeological layers that date to the final centuries of the Common Era. Many scholars believe that the high incidence of miqvaot in these layers reflects a Jewish obsession with ritual purity during this period. A person can become ritually impure by coming into contact with a dead body (Numbers 19:11-22) or with various bodily discharges (Leviticus 15:1-33). Perhaps the large number of Second Temple Era miqvaot can be linked to rising Jewish messianic expectations as imperial Roman presence grew increasingly oppressive. Jews needed to maintain a constant state of ritual purity in the event that the Messiah should arrive. This is supported by Josephus’ description of the building of Tiberias by Herod Antipas in the year 18 CE. Due to the large number of graves in the area, Jews were reluctant to live in the new city, lest they contract impurity. Herod’s solution was to offer them incentives including houses and land:

And now Herod the tetrarch, who was in great favor with Tiberius, built a city of the same name with him, and called it Tiberias. He built it in the best part of Galilee, at the Lake of Gennesareth. There are warm baths at a little distance from it, in a village named Hammath. Strangers came and inhabited this city; a great number of the inhabitants were Galileans also; and many were necessitated by Herod to come there out of the country belonging to him, and were by force compelled to be its inhabitants; some of them were persons of condition. He also admitted poor people, such as those that were collected from all parts, to dwell in it. Nay, some of them were not quite free-men, and these he was benefactor to, and made them free in great numbers; but obliged them not to forsake the city, by building them very good houses at his own expenses, and by giving them land also; for he was sensible, that to make this place a habitation was to transgress the Jewish ancient laws, because many tombs were removed from here in order to make room for the city Tiberias, whereas our laws pronounce that such inhabitants are unclean for seven days. (Josephus, Jewish Antiquities 18.2)

For those who are especially curious: the neighborhood of Arnona where this new miqveh was found was built in 1930s and features prominently in Amos Oz’s novel, A Tale of Love and Darkness. The famous historian Joseph Klausner and the Nobel laureate Shai Agnon were among the first inhabitants of the neighborhood. Arnona was given its name based on the fact that on a clear day it is possible to see the Arnon River (Wadi Mujib), which flows west from the Transjordanian highlands into the Dead Sea from it. 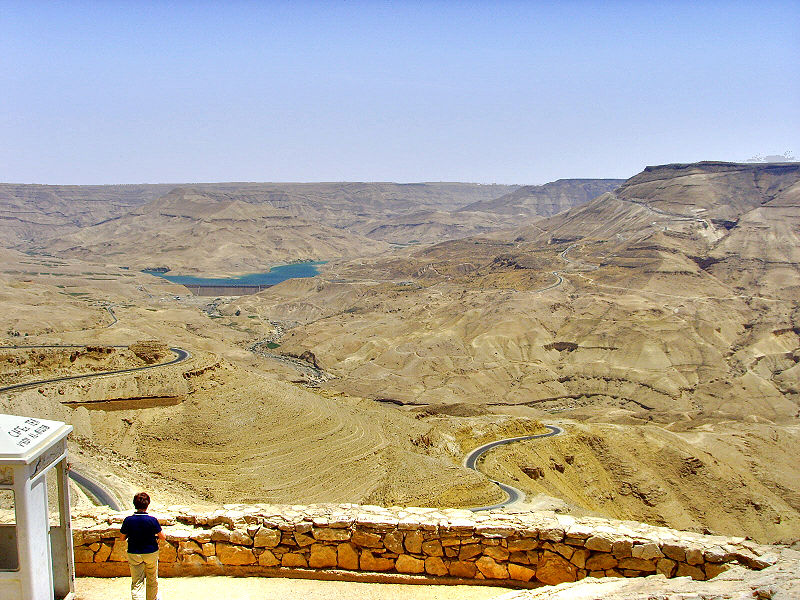 Wadi Mujib, in Jordan, known in the Bible as Nahal Arnon, the border between the Moabites and Amorites (Numbers 21:13).