On The Road To Emmaus

By Jonathan LipnickMay 8, 2016No comments

Following the Resurrection on Easter Sunday,  the Gospels describe several incidents in which the risen Jesus miraculously appears to his followers. The reactions of all these witnesses follow a similar pattern: obliviousness followed by identification, fear and finally recognition. For example, Jesus appears to Mary Magdalene at the tomb (John 20:11-18), to the disciples in Jerusalem (Luke 24:36-49), and to the disciples at Sea of Galilee (John 21:1-14). From a theological perspective, these post-Resurrection appearances are of utmost importance because they demonstrate that Jesus was no mere human being that died on a cross.

The appearances 0f the risen Jesus serve to prove to the reader that the disciples did not simply take the body out of the tomb and concoct the story of the Resurrection (which was evidently a widespread accusation against the early Church). According to Acts 17:32, there was widespread skepticism among pagans regarding the authenticity of this supernatural event. The main point, therefore, of these scenes is to provide concrete evidence that Jesus had indeed been brought back to life physically and not just spiritually. The risen Jesus is not an apparition, but a fully physical living being. This is why he is depicted eating before them, and why his wounds are visible and even probed by one particularly skeptical disciple (John 20:27).

Another such appearance of the risen Jesus occurs on the road to a village called Emmaus. The story which is found only in Luke begins as follows:

13 Now that same day two of them were going to a village called Emmaus, about sixty stadia from Jerusalem. 14 They were talking with each other about everything that had happened. 15 As they talked and discussed these things with each other, Jesus himself came up and walked along with them; 16 but they were kept from recognizing him. 17 He asked them, “What are you discussing together as you walk along?” They stood still, their faces downcast. 18 One of them, named Cleopas, asked him, “Are you the only one visiting Jerusalem who does not know the things that have happened there in these days?” (Luke 24:13-18)

In this story, Jesus appears to two of his former disciples on the road between Jerusalem and Emmaus. The two individuals who see Jesus in this scene are Cleopas and a second person who is not named. They are not from the inner circle of 12 disciples, but probably members of the outer circle of Jesus’ followers. They are leaving Jerusalem, and have headed west towards the village of Emmaus. An important detail is the mention of “sixty stadia” in verse 13. One stadium (singular of stadia) is 600 Greek feet (between 150-200 meters depending on the authority used), the length of the running track in ancient Roman arenas. In the image below you can see one of the best preserved ancient Greek stadia at Nemea, located in the northeastern Peloponnese. The track 600 ancient feet in length (178 meters). So, sixty stadia is equal to approximately 7 miles (10 km), definitely a walkable distance.

Where exactly is the village of Emmaus located? The name Emmaus (Ἐμμαούς) is the Greek version of the original Hebrew name Hamma (חמה) which means “hot spring.” This is not really a proper toponym; there are several sites containing springs in the Land of Israel that were given this general name. The traditional pilgrimage site which commemorates the incident of Luke 24 is known as “Nicopolis” pictured here. 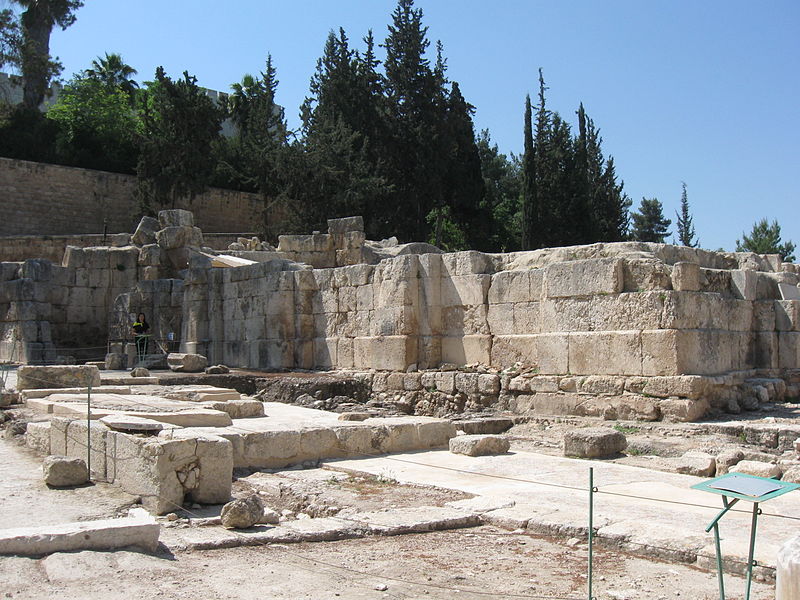 This is found just off of the main Jerusalem-Tel Aviv highway (route 1) at the Latrun interchange. Today this is within Park Canada, which was created on the ruins of the Arab village Imwas (this preserves the name Emmaus). This is in the Judean Shephelah, quite a long way from the hill country of Jerusalem. The distance is roughly 30 kilometers, much further than the “sixty stadia” described in Luke 24:13. The complication is due to the fact that some ancient manuscripts of the Gospel of Luke contain the variant “one hundred sixty stadia” (27 km) instead of “sixty stadia” (10 km). Due to this scribal variant, since the Byzantine period, Nicopolis has been the site believed to be Emmaus of Luke 24. In this image you see remains of a 1st century BCE administrative building located on Tel Eked, within Park Canada. Most modern scholars prefer the reading 60 stadia instead of 160 stadia, making Nicopolis not a likely candidate. 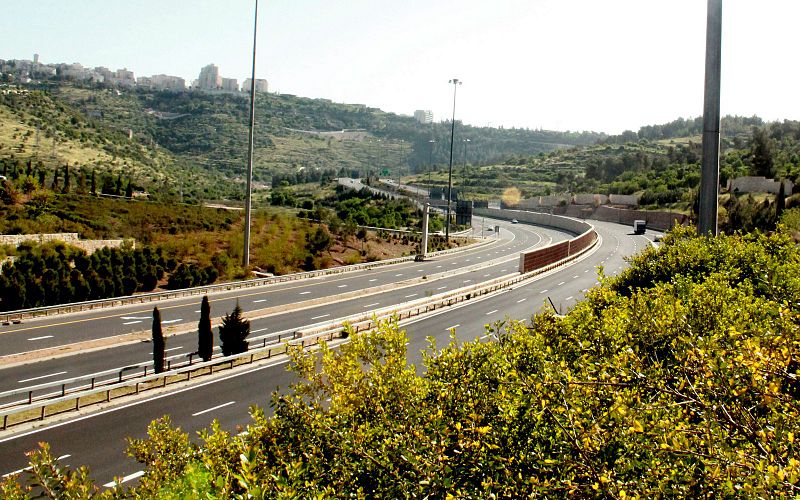 An interesting aside: The most important highway in modern-day Israel is Route 1 which connects Tel Aviv to Jerusalem. This road follows the Kiryat Yearim Ridge Route, a difficult course that runs counter to the natural topography of the country. It goes up and down several steep inclines multiple times, which is not a very logical choice. Why does the most vital national highway follow this hilly route as opposed to the gentler incline 10 km to the north? Because the modern highway essentially follows the same route that the Byzantine pilgrimage road did. Ancient pilgrims would arrive at the port of Jaffa and en route to Jerusalem would go out of their way to stop at Emmaus-Nicopolis. This required heading into a rather treacherous hilly ascent instead of the more logical Bet-Horon ascent to the north (modern-day Route 443).

If we assume that the correct reading of Luke 24:13 is “sixty stadia” and not “one-hundred sixty stadia,” then the correct location of Emmaus could very well be the site pictured above. It is called Motza today. It is located approximately 6 km west of Jerusalem, and is situated right alongside the same Route 1 highway just discussed. The main support for this site is an off-hand remark made by Josephus in his book The Jewish Wars. In Book 7, Josephus writes that after the Romans triumphed over the Great Revolt in 70 CE, the Emperor Vespasian:

assigned a place for eight hundred men only, whom he had dismissed from his army, which he gave them for their habitation. It is called Emmaus and is distant from Jerusalem thirty stadia” (War 7.6).

This newly founded suburb of Jerusalem was inhabited by discharged Roman soldiers and came to be called Colonia. Many scholars think that this is the Emmaus referred to in Luke 24:13, meaning that “sixty stadia” is actually the roundtrip distance. In the mid-19th century a Zionist by the name of Shaul Yehuda purchased land here and built one of the first Jewish suburbs of Jerusalem. He called it Motza (following Joshua 18:26). Here is the house that belonged to one of his colleagues, Yehoshua Yellin.

The story of the appearance of Jesus on the road to Emmaus in Luke’s Gospel contains the word “recognize” (Greek: epiginomai) twice. In verse 16, we read that “their eyes were kept from recognizing him” and in verse 31 “their eyes were opened and they recognized” For Luke, the whole point of reading the Gospel is to achieve recognition, epignosis (ἐπίγνωσις): knowledge of God, spiritual revelation. This is often an instantaneous recognition triggered by something such as the breaking of bread in a fellowship meal. The same concept plays a very central role in the thought of Paul, who wrote “I keep asking that the God of our Lord Jesus Christ, the glorious Father, may give you the Spirit of wisdom and revelation, so that you may know him better [ἐν ἐπιγνώσει αὐτοῦ]” (Ephesians 1:17).