Cardinal Martini: A Forest Is To Be Planted Near Tiberias In June 2013 In Memory Of The Late Cardinal

By Dr. Eli Lizorkin-EyzenbergMay 2, 2013No comments 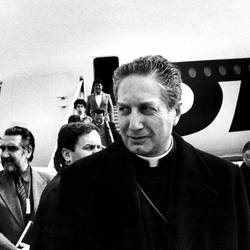 Next summer, Christians and Jews will be going on a pilgrimage to Israel to commemorate Cardinal Carlo Maria Martini. Pilgrims will plant the first trees and a commemorative stela will be unveiled on 17 June 2013. The idea for the forest – which will be planted near Tiberias to commemorate the cardinal who passed away last summer – was introduced by Giuseppe Laras (formerly Chief Rabbi of Milan) and the project will receive the support of the National Jewish Fund.

The details of the initiative will be announced in the next few days: the pilgrimage will take place between 9 and 17 June in honour of Cardinal Martini and to commemorate the 50th anniversary of the Second Vatican Council and the 65th anniversary of the creation of the Israeli State. What makes this a landmark initiative is that for the first time a project of its kind is being promoted by rabbis and Jewish scholars in Italy. And they are extending a special invitation to Christians. Aside from the project’s two masterminds, Laras and Vittorio Robiati Bendaud, other figures who will be joining the pilgrimage include the Rabbi Elia Richetti, President of the Italian Rabbinical Assembly and Professor David Meghnagi, a Professor of Rome Tre University and director of the international Masters programme in Holocaust studies. Christian participants will include Mgr. Gianantonio Borgonovo, the new archpriest of Milan Cathedral, Mgr. Gino Battaglia, director of the Italian Episcopal Conference’s office for ecumenism and dialogue and Waldesian theologian Gioacchino Pistone.

The pilgrimage will also be an opportunity to gain a better under standing of the Jewish world in Israel from the inside. Certain programme choices were made specifically with this in mind: key moments include a meeting with the Chief Rabbi of Tel Aviv, Israel Meir Lau, the joint recital of psalms at the Kotel (the so-called Wailing Wall, in Jerusalem), the possibility of spending some parts of the shabbat together, visits to Knesset (the Israeli parliament), Yad Vashem (the Holocaust memorial) and the tomb of the great Jewish philosopher Moses Maimonides in Tiberias. All these visits will take place alongside trips to Christian sites in Jerusalem and Galilee. The pilgrimage is open to anyone who wants to join. The trip is being organised by Italian tour operator Opera Pellegrinaggi del Rogate.

The pilgrimage will end on 17 June 2013, with an inauguration ceremony for the forest dedicated to Cardinal Martini. A symbolic act to remind people of the progress made in Jewish Christian dialogue, starting with a highly significant act within the Jewish tradition, as described on the webpage of the National Jewish Fund (KKL).