In An Audience With The Pope This Morning, The Jewish Head Of State Extended An Invitation To Francis To Visit Jerusalem 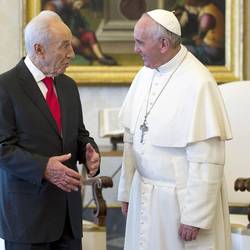 A cordial meeting between Israeli president Shimon Peres and Pope Francis was held this morning, in the Vatican. During the audience, which lasted 30 minutes, the president invited Francis to Jerusalem. “It’s not just me who would like to see you there, the whole of Israel would.” When the two shook hands at the beginning of the audience, Peres asked Bergoglio to pray “for all of us.” Before parting, the president assured the Pope he would pray for him: “When I go to Assisi tomorrow, I will pray for you.” After the audience, Peres met the Vatican Secretary of State, Tarcisio Bertone and the “minister of foreign affairs” Dominique Mamberti.

A statement issued by the Holy See informs that “during the cordial talks, the political and social situation in the Middle East—where more than a few conflicts persist—was addressed. A speedy resumption of negotiations between Israelis and Palestinians is hoped for, so that, with the courageous decisions and availability of both sides as well as support from the international community, an agreement may be reached that respects the legitimate aspirations of the two Peoples, thus decisively contributing to the peace and stability of the region.” “Reference to the important issue of the City of Jerusalem was not overlooked.”

The statement went on to say that “particular worry for the conflict that plagues Syria was expressed, for which a political solution is hoped for that privileges the logic of reconciliation and dialogue. A number of issues concerning relations between the State of Israel and the Holy See and between state authorities and the local Catholic communities were also addressed. In conclusion, the significant progress made by the Bilateral Working Commission, which is preparing anagreement regarding issues of common interest, was appreciated and its rapid conclusion is foreseen.”

Francis and Peres also discussed the work being carried out by the commission that was set up to try and reach an agreement on the long-standing question of the Cenacle. The process has been a long and confused one and always seems on the verge of being concluded, but as yet has not. During today’s audience, the President assured Francis that Israel was eager to reach an agreement on the Cenacle, which once belonged to the Franciscan Custody of the Holy Land. Israel could allow Christians to celebrate mass again in the place where according to the Christian tradition Jesus celebrated the Last Supper.

Over the past few years, the Vatican and Israeli delegations have been working on a solution that involves ownership of the Cenacle, the two small rooms adjacent to it and the staircase providing access to it, be transferred to the Custody of the Holy Land. The Israeli state would maintain ownership of the convent that was built by the Franciscans (trying to ensure spaces are not given to new tenants other than the already existing ones) and the area surrounding the Tomb of David, beneath the Cenacle. This, however, may not be the final solution the Vatican has been hoping for. Peres’ words on the Cenacle and the possibility of allowing Christians celebrate mass there, seem to indicate this. Israel would grant the Pope special authority over the Cenacle, indicating that the ownership of one of the most important holy sites in Christianity will not be returned to the Christians.

The Pope presented Peres with some medals and the Israeli president gave Franciscan copy of the Bible of Jerusalem, translated into Hebrew and English by the Dominican Ecole Biblique de Jerusalem. Peres included a handwritten note in the Bible, which read: “I hope you will prosper in everything that you do and wherever you go. With high esteem, Shimon Peres.” Vatican spokesman, Fr. Federico Lombardi, said Pope Francis welcomed Peres’ invitation with great joy because Popes are always glad to visit the Holy Land. However, he also added that it is known yet known when he might visit. Bergoglio has already been invited to Jerusalem by Latin Patriarch, Fouad Twal and the Ecumenical Patriarch of Constantinople, Bartolomew I, suggested a repeat of the historic embrace between Paul VI and Patriarch Athenagoras in Jerusalem in January 1964.