Is this the Site of the Expulsion of the Money Changers? 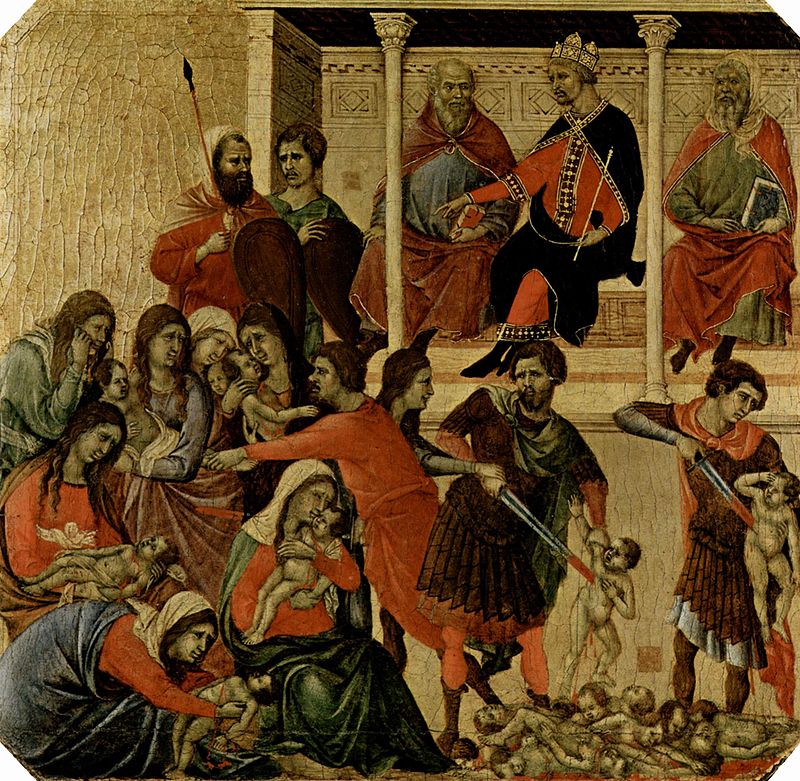 King Herod the Great, who ruled the Land of Israel as a client of the Romans from 37-4 BCE, was among the most widely feared individuals who ever sat on a throne in Jerusalem. He was wildly despotic, manipulative, murderous, and paranoid. But today, these less savory aspects of Herod’s character have mostly faded into the past. What we are left with are the impressive remains of Herod’s numerous building projects. 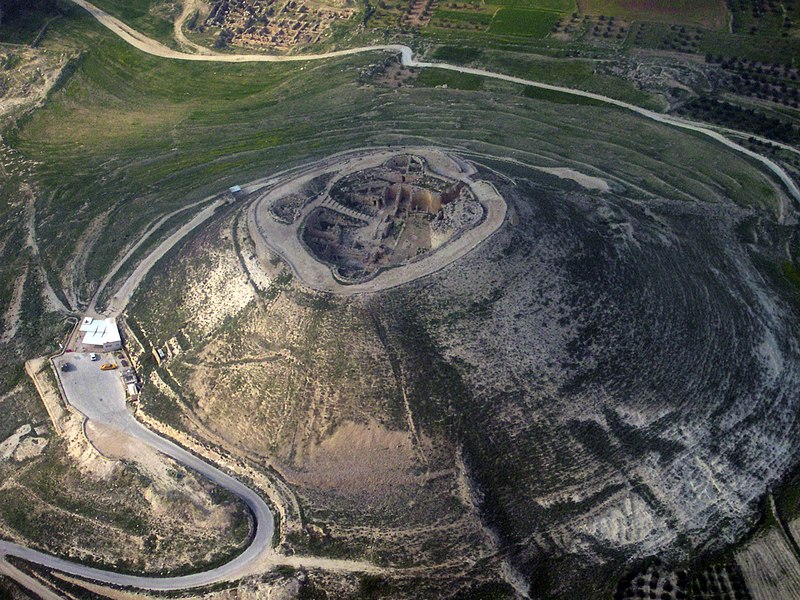 An aerial view of the fortress of Herodium (5 miles south of Jerusalem) which Herod later converted into his own burial site.

Many people are familiar with Herod’s desert fortresses such as Masada and Herodium and his renovation of the Second Temple. But we tend to forget that Herod did not merely rebuild the Temple itself, but totally overhauled the Temple Mount, creating the artificial flat platform  that still exists today. It is known in Hebrew as Har Habayit (“the Temple Mount”) and in Arabic as Haram es-Sharif (“the Noble Sanctuary”) and is pictured here:

This was done by building a series of retaining walls and vaulted arches around Jerusalem’s eastern hill, in order to expand the surface area of the sacred plaza (Greek: temenos) surrounding the Temple itself (Greek: naos). The finished product was an artificial platform that housed the largest sacred structure in the Roman Empire at the time. 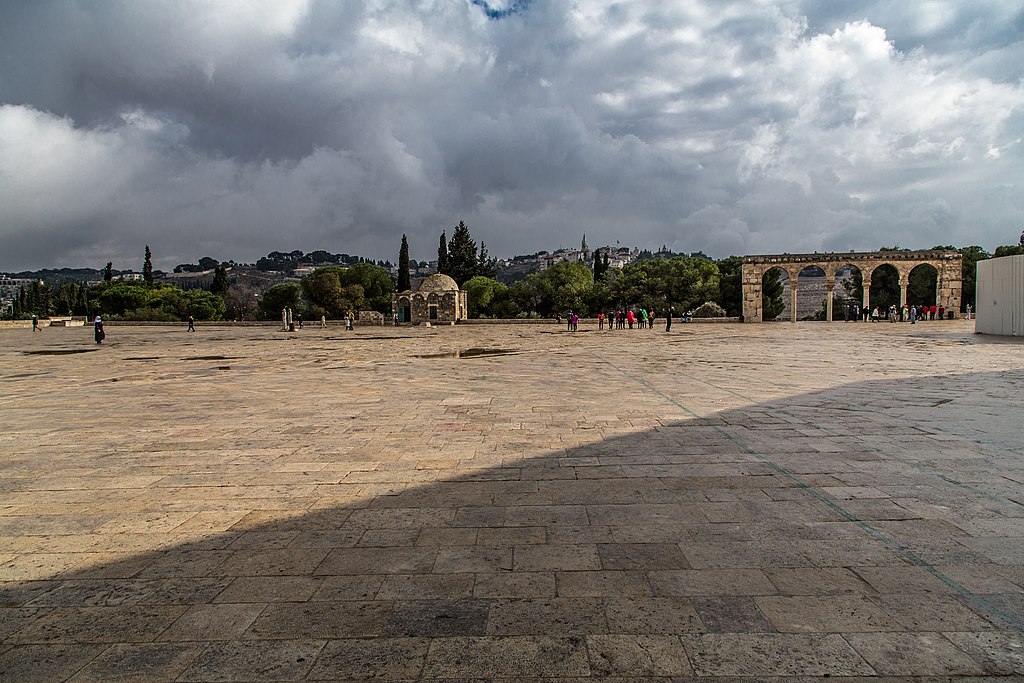 For example, Herod’s Temple Mount was five times bigger than the Temple of Baal-Shamin in Palmyra (destroyed by ISIS in 2015), pictured here:

One of the most impressive buildings built by Herod the Great was located on the southern side of the expanded Temple Mount platform. It was known as the “Royal Stoa” and was a unique building unto itself. It was also the part of the renovated Temple complex seen by the most number of people because it was not off-limits to anyone (i.e., Gentiles, women, non-priests). Likely the “Courtyard of the Gentiles” referred to by Josephus was located directly adjacent to the Royal Stoa. Separating the open area allowed to Gentiles from the Jewish-only zone closer to the Temple was a stone barricade (soreg), of which remnants have been found. Pictured here is a monumental Greek inscription discovered in 1871 by Clermont-Ganneau, which warns Gentiles not to pass beyond the barrier: “No stranger is to enter within the balustrade round the temple and enclosure. Whoever is caught will be responsible to himself for his death, which will ensue.”

Pictured here is the “Holy Land Hotel model” of Second Temple Era Jerusalem designed by Prof. Michael Avi-Yonah, today housed at the Israel Museum. The Royal Stoa is the red-roofed structure on the extreme left side of the Temple Mount.

In ancient Greek architecture the word stoa (στοά) means a covered walkway or roofed colonnade, commonly for public use. It is usually translated as “portico” or “porch” in English. Stoas were open at the entrance with columns lining the side of the building; they created a safe, enveloping, protective atmosphere. Here is an image of the reconstructed Stoa of Attalos, located in the ancient agora of Athens.

According to Josephus, the magnificent Royal Stoa was the largest building atop the Temple Mount. It extended the whole length of the southern side of the esplanade. It was the main site of commercial activity atop the Temple Mount and was a major place for political meetings. It was a long three-aisled structure containing four rows of massive Corinthian columns holding up the roof.Although this was indeed a stoa, the Royal Stoa was also a basilica. The word basilica comes from the Greek basileos (βασιλεύς) meaning “king” because this type of building was commonly used as the royal palace for a king. After Christianity was legalized in the 4th century, the basilica structure was adopted for church architecture.

An early 20th century photograph of the interior of the Church of the Nativity in Bethlehem, which has remained largely unchanged since it was rebuilt by the emperor Justinian in the 6th century. Note the basilical floorplan, containing four rows of columns surrounding a central nave. Not pictured are the three apses at the eastern side of the church.

As seen in the image of the Holy Land model above, the other three sides of the Temple Mount esplanade were bordered by much simpler (non-basilical) covered porticoes (stoas). The most famous of these was located on the eastern side, overlooking the Kidron Valley. It was called Solomon’s Portico and is mentioned in John 10:23 (as well as Acts 3:11.). This was during an earlier visit by Jesus to Jerusalem on the occasion of Hanukkah found only in John. Of course, King Solomon himself had nothing to do with the building of this Herodian portico.

If, however, we examine the final week of Jesus in Jerusalem, it is quite likely that the Royal Stoa was the setting for one of the most crucial incidents that took place during this week: the overturning of the tables of the money-changers (Matt. 21:12-13; Mark 11:15-17; Luke 19:45-48). This incident is popularly known as the “Cleansing of the Temple,” which is a problematic term because it implies that the Temple itself was somehow impure and in need of cleansing. The Gospels make no such statement. Rather, the problem is that the esplanade of the Temple Mount had become excessively commercialized. A more precise – if rather unwieldy – name would be the “Decommercialization of the Temple’s Outer Courtyards”. More than anything else that Jesus did during his final week, it was this act which got him in trouble with the Jewish authorities, paving the way for his eventual arrest and execution.